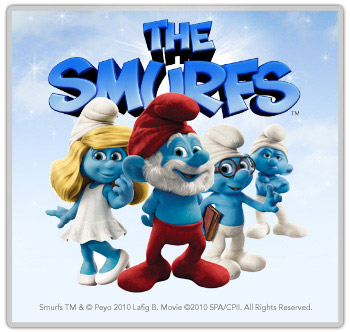 A new promo image for The Smurfs, directed by Raja Gosnell from the script by J. David Stem, David N. Weiss, Jay Scherick and David Ronn, has been released. It gives you a first look at Smurfette and Brainy Smurf and also features the previously-revealed Papa Smurf and Grumpy Smurf. And this is all part of an FAO Shwarz Contest where the winner will get 4 VIP tickets to the premiere. You’ll get to walk the blue carpet, plus hotel and airfare are included as well. The Smurfs synopsis goes like this: “The movie will follow the diminutive blue people as they flee from their village after Gargamel locates it. They slip away through a magical portal and land smack in the middle of New York City’s Central Park. With Gargamel close behind, the Smurfs must find a way home before the wizard catches up with them.” And yes, you already know that some interesting (and pretty big) cast is involved in the whole project that includes Jonathan Winters as Papa Smurf, George Lopez as Grouchy Smurf, Katy Perry as Smurfette, Alan Cumming is Gutsy Smurf, Fred Armisen will voice Brainy Smurf. Anton Yelchin will play Clumsy Smurf, Paul Rubens will voice Jokey Smurf, John Oliver – Vanity Smurf, Kenan Thompson will be Greedy Smurf, B.J.Novak will voice Baker Smurf, while Jeff Foxworthy will be Handy Smurf. And when it comes to live action cast, we’ll have a chance to see Neil Patrick Harris and Jayma Mays star as “an expectant couple whose lives are turned upside down when the Smurfs cross over from their magical village to New York City”, Hank Azaria will play the evil wizard Gargamel, while georgeous Sofia Vergara plays Odile, Harris’s boss, a cosmetics executive. So, get ready for Smurfs adventures guys because Columbia Pictures is planning an August 3, 2011 release.
Continue Reading
Advertisement
You may also like...
Related Topics:Alan Cumming, Anton Yelchin, George Lopez, Hank Azaria, John Oliver, Jonathan Winters, Katy Perry, Neil Patrick Harris, Paul Rubens, Raja Gosnell, Sofia Vergara, The Smurfs