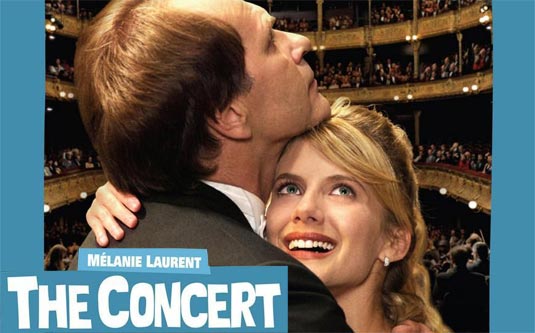 We have added the second trailer and new poster for Weinstein Company upcoming film The Concert starring Mélanie Laurent (Inglourious Basterds), Aleksei Guskov, Dimitri Nazarov, Francois Berleand and Miou-Miou. Thirty years ago, Andrei Simoniovich Filipov, the renowned conductor of the Bolshoi orchestra, was fired for hiring Jewish musicians. Now a mere cleaning man at the Bolshoi, he learns by accident that the Châtelet Theater in Paris invites the Bolshoi orchestra to play there. He decides to gather together his former musicians and to perform in Paris in the place of the current Bolshoi orchestra. As a solo violin player to accompany his old Jewish or Gypsy musicians he wants Anne-Marie Jacquet, a young virtuoso. If they all overcome the hardships ahead this very special concert will be a triumph. The Concert, directed by Radu Mihaileanu, will hit limited theaters in the U.S. on July 16th, 2010.

The Concert Poster The Concert Trailer #2
Continue Reading
Advertisement
You may also like...
Related Topics:Mélanie Laurent