Connect with us
Nicolas Cage will be back for the upcoming Ghost Rider 2, just in case you’ve been worried about that. 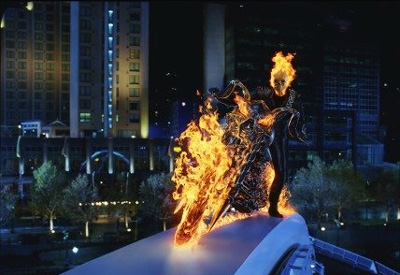 The title for this movie is not announced officially by the makers Sony, but there are rumors saying it’s going to be Ghost Rider: Spirit of Vengeance. Cage also confirmed that Mark Neveldine and Bryan Taylor, the directors of Crank will direct the movie. At this moment, there are still no details about the upcoming sequel, but David Goyer has been working on the script and he previously mentioned that the film is set 8 years after the first one, and is a “bit more stripped down and darker.” Filmed in 2007, the first Ghost Rider movie was written and directed by Mark Steven Johnson and it starred Nicolas Cage as Johnny Blaze who was a stunt motorcyclist who can morphs into the demon vigilante called Ghost Rider. Its story is based on a Marvel Comics character having the same title. As usual, we’ll be back with any new info about Ghost Rider 2, so stay tuned!
Continue Reading
Advertisement
You may also like...
Related Topics:David Goyer, Ghost Rider 2, Mark Neveldine, Nicolas Cage