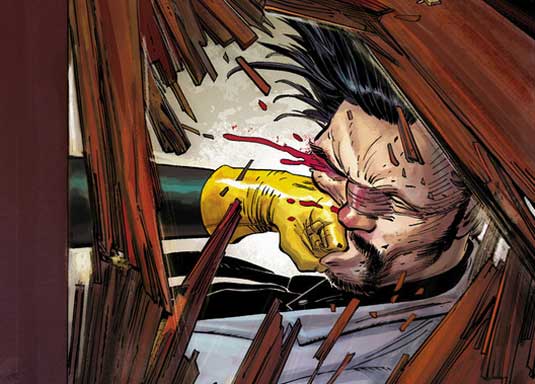 Nicolas Cage, Aaron Johnson and Lyndsy Fonseca are set to star in Kick-Ass, Matthew Vaughn‘s adaptation of Mark Millar comic book, says The Hollywood Reporter. Cage will play an ex-cop who, during his battles with a drug lord, trains his daughter to be a lethal weapon. The movie’s central character will be played by British actor Aaron Johnson, while 21 year old American actress Lyndsy Fonseca plays the object of the teen’s infatuation who believes Dave is gay. Christopher Mintz-Plasse is also in the cast. The Marvel Comics’ Icon imprint book centers on a high school dweeb named Dave Lizewski who decides to become a superhero even though he has no athletic ability or coordination. Things change when he eventually runs into real bad guys with real weapons. Johnson plays title character, while Fonseca plays the object of the teen’s infatuation who believes Dave is gay. Cage is a former cop who wants to bring down a druglord and has trained his daughter (Chloe Moretz) to be a lethal weapon. One source says production will begin in three weeks while the trades say the actual shoot is scheduled for the fall in London and Toronto.
Continue Reading
Advertisement
You may also like...
Related Topics:Aaron Johnson, Chloe Moretz, Kick-Ass, Mark Millar, Matthew Vaughn, Nicolas Cage

“Quantum of Solace” Pushed Back a Week
Kevin McKidd Is The New Highlander?
Advertisement