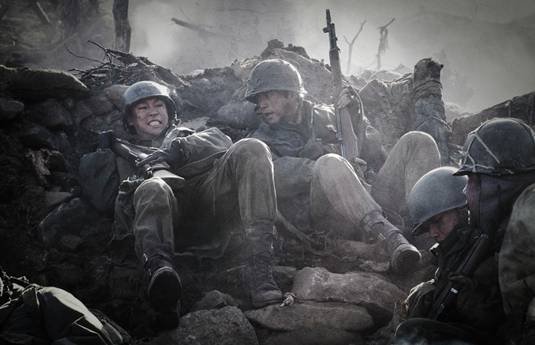 ‘This is a story about three million soldiers who fought in the war, not remembering the reason anymore, and died wishing for the end of it.’ Well Go USA Entertainment has unveiled the official US trailer for  South Korean’s war action film The Front Line, about the Korean War and millions of soldiers who fought in it. This looks quite fascinating with some incredible set pieces and seems like another South Korean Saving Private Ryan, this time telling the story of Korean’s tragic and deadly civil war. Headed for the end of the Korean War, a troubled ceasefire is ordered, but out on the Eastern front line of the Aerok Hills, violent fighting continues. A race to take over this strategic point to secure a new border between the two Koreas is the top prize. The film star Shin Ha-kyun, Ko Soo, Lee Je-hoon, Ryu Seung-soo. The Front Line, or Go-ji-jeon originally, is directed by South Korean cineaste Hun Jang (Rough Cut and Secret Reunion) from a screenplay penned by Sang-yeon Park. This was already released in South Korea last summer, but Well Go USA set for US release The Front Line on January 13th, to battle for Oscar nominations alongside Steven Spielberg’s War Horse and Zhang Yimou’s The Flowers of War. The production looks quite spectacular. Watch it below! [youtube]http://www.youtube.com/watch?v=Ba0fm-6q6QQ[/youtube]

The Front Line – Official US Trailer