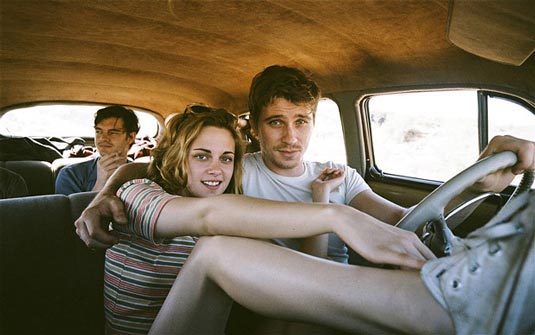 The release of Walter Salles‘ film version of Jack Kerouac‘s generational signpost novel, On the Road, rolls ever closer, following the film’s relatively successful bow at Cannes this past May. Being interested in Kerouac pretty much, I’m hence even more interested in the film and to see how actors like Garrett Hedlund and my-mad-and-my-happy-face-are-the-same Kristen Stewart do with their roles; both look a lot more energized than we often see from them. And then there’s Viggo Mortensen as a vague version of William S. Burroughs. I’d see just about any movie for him alone. A new UK trailer has hit, and it gives us a bit more of all the elements of the film: the actors, the period recreation, the music, and a taste of the text through the trailer voiceover. Check it out below: Synopsis:

After the death of his father, Sal Paradise, an aspiring New York writer, meets Dean Moriarty, a wild and infectiously charismatic ex-con. They hit it off immediately. Determined to avoid the pitfalls of a narrow, prescribed life, Sal hits the road, joining Dean on what evolves into a life-changing physical and emotional odyssey. Thirsting for freedom, they discover the world, the ecstasy of experience, the connectedness of humanity and ultimately themselves.

On the Road also stars Amy Adams, Kirsten Dunst, Elisabeth Moss, Steve Buscemi, Sam Riley and others. There’s no exact US release date for the film at this point (except for it will be this year), but that could change in the next month, as the fall festival circuit gets under way. IFC and Sundance Selects partnered to pick up the movie after Cannes, so hopefully we’ll have a release date in the near future. Stay tuned for updates!
Continue Reading
Advertisement
You may also like...
Related Topics:Amy Adams, Elisabeth Moss, Garrett Hedlund, Kirsten Dunst, Kristen Stewart, On the Road, Sam Riley, Steve Buscemi, Viggo Mortensen, Walter Salles

THE BOURNE LEGACY Rachel Weisz Featurette
Must Watch: Second THIS IS 40 Trailer
Advertisement