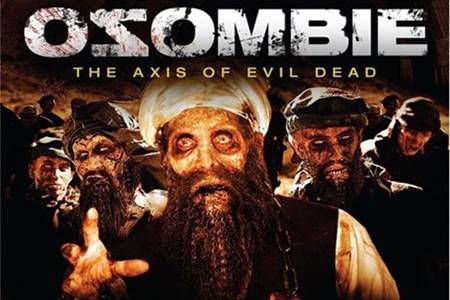 I agree no intro needed, this video speaks for itself. Whoever thought Abraham Lincoln: Vampire Hunter would be the year’s dumbest movie – he was wrong. Forthcoming Osombie: The Axis of Evil Dead, a low-budget, feature-length film, which depicts a zombie uprising in Afghanistan led by a now-zombified Osama bin Laden has earned that dubious honor. Here’s the plot:

The story follows Dusty, a yoga instructor from Colorado, who is on a desperate rescue mission to save her crazy brother Derek, a conspiracy theorist who is convinced Osama Bin Laden is still alive, despite having been buried at sea. In Afghanistan, Dusty falls in with a team of NATO Special Forces on a secret assignment. Turns out Derek is not so crazy after all, and that Osama has returned from his watery grave and is making an army of zombie terrorists. When the group crashes headlong into the growing zombie apocalypse, Dusty and the troops must find and destroy the root of the zombie insurgency before it infests the rest of the world.

We’ve just had a lot of fun with it. We had some great special effects makeup people that had done a lot of Hollywood work. Lots of actions, lots of zombie violence.

Starring Corey Sevier (The Immortals) and Eve Mauro (Miss March), the movie was shot in Utah last November with a planned summer release. Be warned when you watch the teaser below: [youtube]http://www.youtube.com/watch?v=bfD6-5Qf-cc[/youtube]