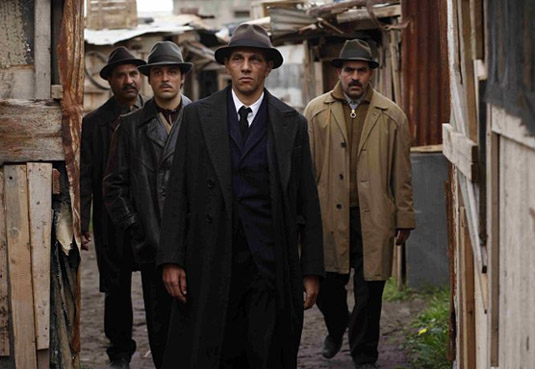 Ok, this is something that’s already described like “controversial and anti-French” movie. So, we are here today to talk about this Rachid Bouchareb‘s movie Hors la Loi or Outside the Law which is among the 19 films competing for Cannes’ top prize and is slated to premiere at the French Riviera festival May 21. Movie is partly set during Algeria’s bloody struggle for independence from France. And as you see, the country’s colonial period still remains a touchy subject in France… The director has reunited with four of the five stars of “Days of Glory”: Djamel Debbouze, Sami Bouajila, Roschdy Zem and Bernard Blancan… Co-written by Bouchareb and his usual collaborator Olivier Lorelle, Outside the Law is set between 1945 and 1962 and traces the life of three brothers whose family has been driven off its land (in Algeria) and survived the Setif massacres. They end up in France, where two of the brothers campaign for Algerian independence, while the third looks on, uncomprehending. The Battle of Paris, which brings the FLN (National Liberation Front) into conflict with the French police, crushes and divides them. The 19.5 million euro production was lead by Tessalit Productions in co-production with France 2, France 3, and companies in Algeria and Belgium. Filming started at the end of July 2009 and lasted five months. The team moved between filming locations in Paris, Algeria, Tunisia, Belgium, Germany and the United States. Already before the film premiered it was met by criticism from French historians. After having studied the script, the Defence Historical Service concluded that “the errors and anachronisms are so many and so gross that they can be identified by any historian. The numerous improbabilities present in the scenario show that the writing of the latter was not preceded by a serious historical study.” Politicians have said Rachid Bouchareb’s competition player Outside the Law should be banned, and the claim against Bouchareb’s pic is that it “falsifies” history. Even Lionel Luca, a member of Nicolas Sarkozy’s UMP party, lashed out at the pic’s portrayal of the French army’s 1945 Setif massacre of at least 8,000 Algerians, while Andre Mayet, a UMP MP for Cannes, said the festival should pull the film. On the other hand, Bouchareb said that “people taking part in this debate have not seen the film.” As you see, pretty controversial things are happening at Cannes. And, it’s only a beginning. At least, it’s not boring around there, and show must go on. Stay tuned! Hors la Loi / Outside the Law Trailer
Continue Reading
Advertisement
You may also like...
Related Topics:Rachid Bouchareb