Now in theaters everywhere is Pandorum, the third film by Christian Alvart, yet the second to hit theaters – a coincidence or maybe something a bit more telling? While Pandorum is far from a bad movie, it’s so incredibly generic that it’s hard to recommend to anyone outside genre fans looking forward to seeing it… read more [Bloody Disgusting] The film starts with two space crew members Bower (Ben Foster) and Payton (Dennis Quaid) waking up from a multi-year hyper-sleep to discover that the ship they are on is dying in power resources. Neither of them can remember the mission due to the fact that they have been sleeping for so long which has the side effect of mild to severe memory loss. Bower volunteers to try to get to the ship’s core reactor up and running as it comes on and off to give the ship spurts of power. Bower and Payton both realize that this must be done to get anywhere as their doesn’t seem to be anyone answering their lines of communication… read more [We Are Movie Geeks] 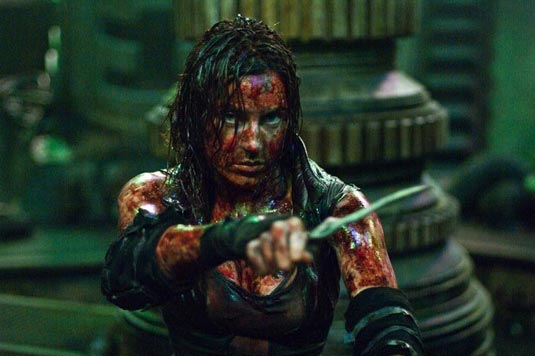 Instead we get chase scenes through gritty, grimy corridors and air shafts that all start to look the same. Quaid is stuck with the thankless job of standing in front of a computer console directing traffic, while Foster runs around the bowels of the ship, picking up various survivors along the way. Then a mutant pops out. Then we run some more. Then someone pulls out a glow stick just in time for another mutant attack. It all becomes very tedious, as does the old ‘ticking clock’ cliché of trying to get to the generators before they grind to a halt… read more [FEARnet]     The film actually starts off OK, with some nice production design that may be extremely derivative of ALIEN, and countless other sci-fi films, but was still pleasing to the eye. For the first twenty minutes or so, I actually thought I might like PANDORUM, but then we get the kung-fu zombies and the film goes right down the drain… read more [Joblo]

Before seeing PANDORUM, all you to need to know are the basics: a small crew of deep space travelers (including Dennis Quaid and Ben Foster) are awakened from hypersleep (echoing the early moments of ALIEN), with little knowledge of their mission and the dangers that await. Without going into a long critical analysis (you can read Mike’s take later in the week) or storyline giveaways, I can tell you that PANDORUM is a fever dream mash-up of sci-fi, horror and mystery that will keep you guessing till the action-packed finish… read more [Fangoria] The first thirty minutes almost dare you to theater hop. It’s not until other survivors are found–increasingly insane of course, but capable of kicking monster ass–that the action really ramps up. After that, it turns out to be not the worst end-of-the-world/trapped-with-really-gross-and-really-hungry-creatures/guess-which-human-cast-member-is-a-secret-bad-guy rip off of Alien 3, Resident Evil, Event Horizon and Spaceballs that you’ve ever seen. It’s just not the best one, either. But if your ongoing happiness in life means a steady diet of This Sort of Thing, here’s some more of it… read more [Pandorum Review by Dave White, movies.com]

Wearing his Ridley Scott cape, Alvart aims for a coolly stylish look to “Pandorum,” with hard cinematography, steamy hallways, and strange light sources joining together to add a layer of menace to the tale. Ostensibly a monster movie, “Pandorum” is better off as an obvious haunted house experience, with liberal usage of shock jumps and gore to keep viewers on their toes, but it never terrifies. There are a few futuristic touches that keep things interesting, but the majority of the film is Bower dodging ghouls, running around the cavernous ship on the hunt for power. At least with the mutants, “Pandorum” is numbingly predictable. Once it goes inside the mind, it just gets embarrassing… read more [This is Braindom] 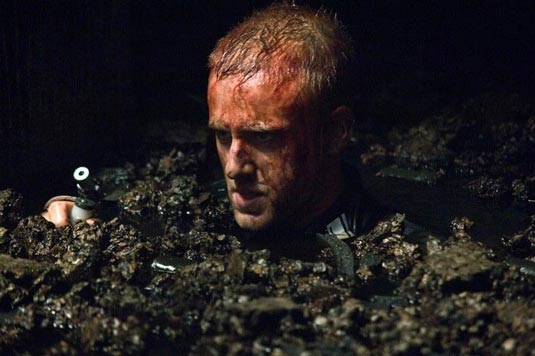 Pandorum doesn’t exactly go that route, but it certainly provides you a couple of avenues to travel down trying to unravel the story. But there are other events that take our attention away from the most direct path. We’ve got mutants, terrible, terrible mutants, and the space madness that often corrupts even the strongest wills out here in the middle of nowhere… read more [Get The Big Picture] As expected, the performance of Ben Foster as Bower was impeccable. The role was a challenging one. A role that called on the performer to convince an audience of complete bewilderment, confusion, fear, intensity, bravery, terror and excitement all at the same time without going overboard on any of them. When Foster’s character wakes up completely unaware of who he is or where he is, he conveys it perfectly, and continues to do so throughout the movie. I’ve got to confess that despite the fact that I still believe Dennis Quaid is a better actor than Foster, he stumbles a bit through the movie and doesn’t come across nearly as convincing as Foster does… read more [The Movie Blog] 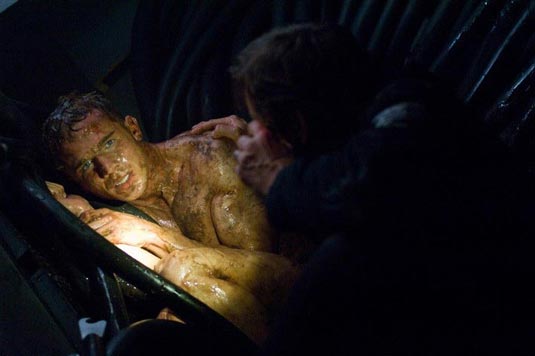 Unlike most movies that throw a doomsday scenario at us, Pandorum has an interesting take on “life as we now know it” thanks to German filmmaker Christian Alvart. The Elysia is obviously a microcosm of long-gone Earth, and something very much like pandorum has contaminated the planet’s air for centuries… read more [The Globe And Mail] “Pandorum” offered some good special effects, some nice gore and death scenes, decent acting and a pretty decent script surprising. Not for the Claustrophobic or anyone afraid of the dark…there are many “Jump scares” in this film. Not too bad for the start of our favorite holiday which is just around the corner! Enjoy!… read more [Horror-Movies.ca] Pandorum – Official Dennis Quaid Interview: [youtube]http://www.youtube.com/watch?v=3WhlOo68jEY[/youtube] Pandorum Featurette:
Continue Reading
Advertisement
You may also like...
Related Topics:Ben Foster, Christian Alvart, Dennis Quaid, Pandorum