‘One small town pawn shop. One big time wild ride.’ Long time no update, but good news! The R-rated regular violent redneck action comedy Pawn Shop Chronicles has finally debuted its poster and trailer, courtesy of ET. The trailer below looks fairly promising and among impressive all-male cast Brendan Fraser steels the show bearing a slight resemblance to Elvis, the King of Rock and Roll. A country version of a Guy Ritchie heist film (down in the dirty South) has plenty of drug use, gun play and strangeness, but it is one hell of a ride. The star-studded cast includes Paul Walker, Norman Reedus, Matt Dillon, Elijah Wood, Vincent D’Onofrio, Thomas Jane, Lukas Haas, Fraser and DJ Qualls along with Chi McBride, Ashlee Simpson, Norman Reedus and Mark Povinelli. Directed by Wayne Kramer (Running Scared) from a screenplay written by Adam Minarovich, Pawn Shop Chronicles includes interconnected stories, which center on a missing wedding ring that leads to a wild goose chase. The movie opens in selected cities and on demand starting July 12th, 2013. Get a sneak peek at the film that promises to deliver a hell of a great laugh. Here’s the synopsis:

The film revolves around a small town pawn shop that attracts big-time mayhem when a missing wedding ring leads to a wild goose chase. Watch the trailer to get a sneak peek of the action, which includes zombie ladies dressed in the American flag, an Elvis impersonator and a creepy clown robber whose weapon of choice is a bow and arrow.

And here’s the poster: 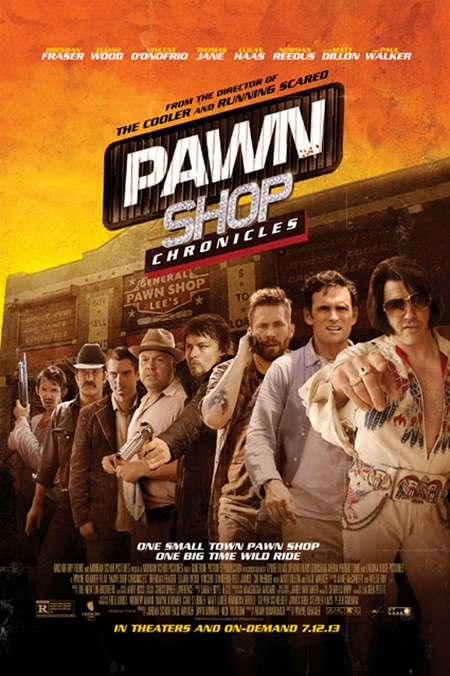