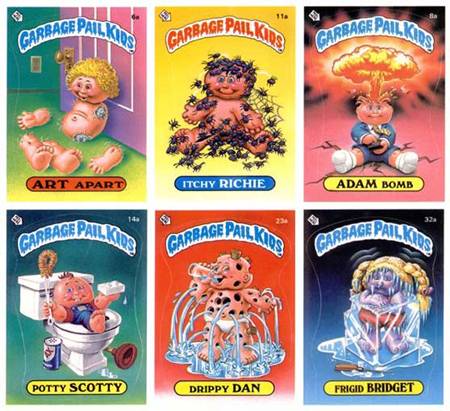 The more disgusting it is, the more valuable it is! If you are a 80s kid, you should be familiar with the Garbage Pail Kids trading cards — each character had a funny name related to his abnormality, sometimes quite disturbing. A 1987 cartoon TV series produced and directed by Bob Hathcock and co-written and developed by Flint Dille was never aired in the U.S. due to its controversy themes. There was also a feature done in 1987 and was both a critical and commercial flop. But changing times, changing needs. Yesterday was announced that former Disney CEO Michael Eisner‘s Tornante Company would be producing a new movie based on the Garbage Pail Kids. A fellow named PES, a director and animator of numerous short films and commercials, is slated to make his directorial debut with the film, working from a script by Michael Vukadinovich, who recently scripted The Three Misfortunes of Geppetto for Shawn Levy. The Green Hornet director Michael Gondry said about PES work:

Clicking on a PES film is to open a safe and suddenly see a million ideas glittering and exploding. The only reason you close the door is to re-open it just after and discover what will pop this time.