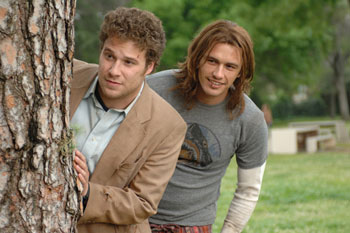 “Dopest dope I ever smoked,” so says James Franco’s Saul, one of the two main characters of the Judd Apatow-produced, David Gordon Green-directed Pineapple Express. That line pretty much sums it up, a normal dude (Seth Rogen) and his pot dealer (Franco) smoke some great green and end up on the run. Who is chasing them? Gary Cole. You read that right. Today we get a great look at Cole, Rogen and Franco in the red-band trailer for the film which has leaked its way online. Take a look below. Pineapple Express hits theaters on August 8, 2008. Watch ‘Pineapple Express’ Red Band Trailer: [flv]http://media.filmschoolrejects.com/trailers/pineappleexpress-redband.flv[/flv]
Continue Reading
Advertisement
You may also like...
Related Topics: