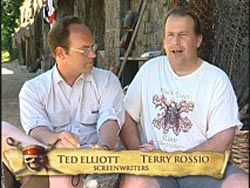 For the record, none of the recent Pirates 4 rumors have any truth, including the so-called record 50 million dollar payday for Depp. Some pretty funny stuff, though. Sacha Cohen? Tim Burton? Studios are way too protective of their franchises for that sort of thing. The only thing that has been officially announced so far is that Johnny Depp will return as Captain Jack Sparrow in the fourth film.

The only thing we know for sure is that Johnny Depp is returning for a fourth adventure.
Continue Reading
Advertisement
You may also like...
Related Topics:Jack Sparrow, Johnny Depp, Pirates of the Caribbean 4, Tim Burton