Filming on the new James Bond film in Italy has been suspended after three accidents hit the  production in five days.

The latest incident left Aris Comninos, Greek stuntman, in a coma after his car, Alfa Romeo 159 collided with a lorry and then crashed into a wall.

Alfa Romeo crashed into a wall during a chase sequence involving a truck and Bond’s Aston Martin along the Gardesana, a curvy, two-lane lakeside road with gorgeous panoramas and many tunnels. 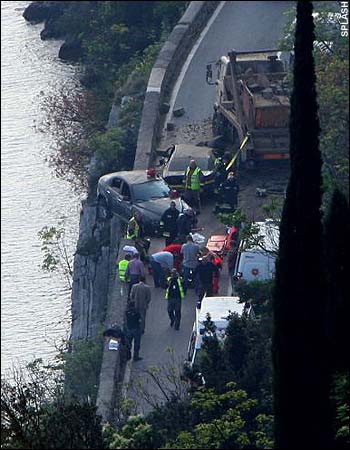 Comninos suffered a fractured cranium during the filming of a dramatic 15-minute car chase which opens the ‘Quantum of Solace.’

His co-driver, Bruno Verdirosi, was also treated in hospital but is not said to be in a serious condition.

A helicopter on standby during the filming flew the seriously injured stunt driver to Verona, where he underwent surgery, said town spokesman Marco Girardi, who also was acting as a liaison to the production company.

“He is doing as well as can be expected,” said a spokesman for his family. An investigation has been launched into the accident by the Italian authorities.

Aris Comninos worked on a previous Bond movie, ‘Tomorrow Never Dies‘, and has also worked on ‘Saving Private Ryan‘, ‘A Little Trip to Heaven‘, ‘Troy‘, ‘The Fourth Angel‘, ‘The World is Not Enough‘ and ‘The Bourne Ultimatum‘, for which he won a Screen Actors Guild Award.

The two stuntmen had already been to hospital after an accident the previous Saturday while they were shooting the same scene. One of them was given 15 stitches to his hand but was immediately discharged, according to local Italian newspapers.

Earlier this week, one of the five Aston Martin DB5s used by the filmmakers was wrecked after swerving off the road and plunging into Lake Garda. Car was destroyed in the accident, but Fraser Dunn, the 29-year-old driver, managed to break free and swim away unharmed. He was fined by Italian police for speeding.

The stunt director of the film’s second unit, Gary Powell, was allegedly unhappy with the results of Saturday’s shoot and had ordered the sequence to be shot again on Wednesday.

Daniel Craig, who plays James Bond, was not on the set at the time. Nor was the overall director of the film, Marc Foster.

“Filming with the second unit on ‘Quantum of Solace’ will be suspended while the accident is investigated,” the statement said.

Continue Reading
Advertisement
You may also like...
Related Topics:James Bond, Quantum of Solace