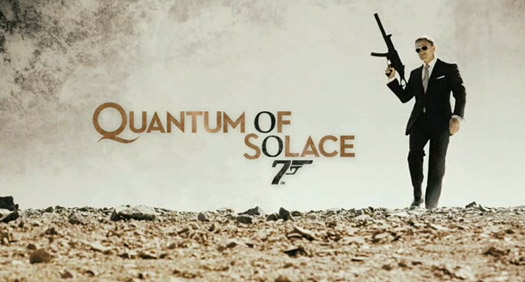 Last week you saw a 10 seconds teaser, now here it is – the full teaser trailer for “Quantum of Solace“. Graeat teaser for the upcoming 22nd Bond film, looks even better than “Casino Royale“. Daniel Craig reprises his role as Ian Fleming’s James Bond 007 in “Quantum of Solace” which continues the high-octane adventures of the British secret agent from “Casino Royale.” Betrayed by Vesper, the woman he loved, 007 fights the urge to make his latest mission personal. Pursuing his determination to uncover the truth, Bond and M (Judi Dench) interrogate Mr. White (Jesper Christensen) who reveals the organization which blackmailed Vesper is far more complex and dangerous than anyone had imagined. Forensic intelligence links an Mi6 traitor to a bank account in Haiti where a case of mistaken identity introduces Bond to the beautiful but feisty Camille (Olga Kurylenko), a woman who has her own vendetta. Camille leads Bond straight to Dominic Greene (Mathieu Amalric), a ruthless businessman and major force within the mysterious organization. On a mission that leads him to Austria, Italy and South America, Bond discovers that Greene, conspiring to take total control of one of the world’s most important natural resources, is forging a deal with the exiled General Medrano (Joaquin Cosio). Using his associates in the organization, and manipulating his powerful contacts within the CIA and the British government, Greene promises to overthrow the existing regime in a Latin American country, giving the General control of the country in exchange for a seemingly barren piece of land. In a minefield of treachery, murder and deceit, Bond allies with old friends in a battle to uncover the truth. As he gets closer to finding the man responsible for the betrayal of Vesper, 007 must keep one step ahead of the CIA, the terrorists and even M, to unravel Greene’s sinister plan and stop his organization. [flv]http://bitcast-a.bitgravity.com/firstshowing/quantum-of-solace.flv[/flv] Daniel Craig, Olga Kurylenko, Mathieu Amalric, Marc Forster talk on “Quantum of Solace”. Take a look at these four video interviews just to completely convince us that this film has a great chance to be better than “Casino Royale”. Despite months of rumors that Amy Winehouse would be the singing Bond Girl, it is multiplatinum-selling foxy Grammy-winner Alicia Keys who will team up with alternarocker Jack White. They will perform “Another Way To Die,” the theme for the 22nd James Bond movie.“Another Way To Die” will be the first theme to feature a duet in James Bond history. The soundtrack to “Quantum of Solace” will be released by J Records on October 28, 2008. “Quantum of Solace” will hit the theathers on November, 14th 2008. Columbia Pictures has confirmed that they have decided to push the theatrical release of “Quantum of Solace” back a single week to November 14th. It makes sense, to take advantage of the holiday movie-going crowd.
Continue Reading
Advertisement
You may also like...
Related Topics:Olga Kurylenko, Quantum of Solace