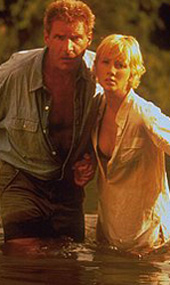 Rachel McAdams will star opposite Harrison Ford in the J.J. Abrams-produced comedy “Morning Glory.” McAdams will play an aspiring news producer who tries to save a failing morning show by gaining control of its feuding news anchors. Ford will play one of those talking heads, an egotistical and iconic newsanchor. Reese Witherspoon had previously been in contention to play the female lead. Ford doesn’t have many comedies to his name. “Hollywood Homicide” and “Six Days, Seven Nights” have been critical and box office failures so let’s hope “Morning Glory” will be good script for him. Roger Michell will direct the movie from a script by Aline Brosh McKenna. Abrams is producing the movie for Paramount through his Bad Robot production company. He previously wrote the Ford drama “Regarding Henry.”
Continue Reading
Advertisement
You may also like...
Related Topics:Harrison Ford, JJ Abrams, Morning Glory, Rachel McAdams