Robert Redford is teaming with director David Lowery for The Old Man and the Gun, a big-screen adaptation of a 2003 New Yorker article about a lifelong bank robber named Forrest Tucker. Lowery will write and direct the film with Redford slated to star and produce. Penned by David Grann, the article tells the story of a man named Forrest Tucker, a bank robber who spent almost his entire life either in prison or breaking out of it including escapes from both Alcatraz and San Quentin. At the age of 78, while living in a retirement community with his wife, he once again tried to crack open some safes, only to once again get caught. Lowery will reportedly take focuses on a specific time period in Tucker’s life, although details were not revealed” one can take a pretty good guess given the star attached. No production schedule was given for The Old Man and the Gun. Vet Redford currently prepares for a role in Marvel Studios’ Captain America: The Winter Soldier, while his The Company You Keep was put into limited release last weekend. Lowery, the man behind ’70s-set crime drama Ain’t Them Bodies Saints, was recently hired to reimagine Pete’s Dragon for Disney. Stay tuned. 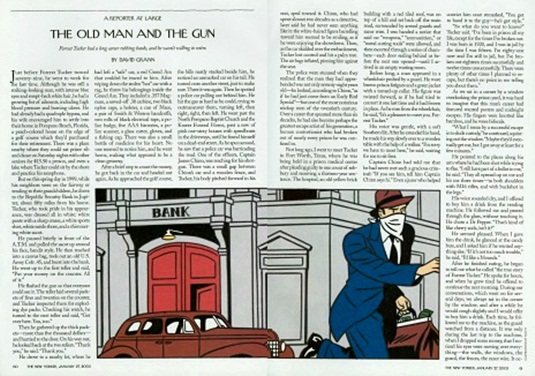