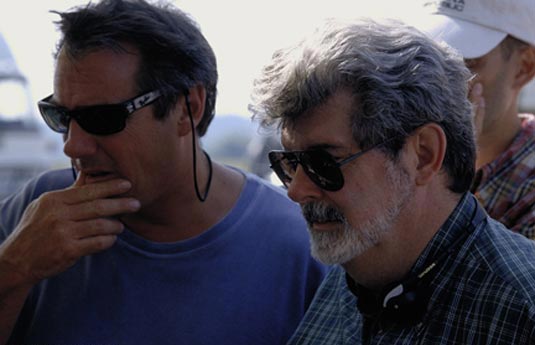 If you’re as big a Star Wars fan as me, you probably know by now that for quite some time producer Rick McCallum has been describing his Star Wars TV series as ‘Deadwood in space’. And while we all (grown-ups) think that it’s a wonderful idea, it seems that it’s the stumbling-stone for the executives who’d go with safer option with broader appeal. In an interview given to Den of Geeks, he points out this no-kids atmosphere as the biggest problem he’s facing on his way to actual production of the show. It also seems that the cost per episode is something of a hiccup, too. He also confirmed that he has more than 50 hours of material scripted already, and reiterated that the budget is a major hold-up: “The episodes are too expensive and… well, we’ve got two things going on. Firstly, we’ve got television as we know it about to implode. You’ve got network TV, which is really where we should be because it has the dollars to pay for this and an audience, but you’re burdened by the fact you only get 42 minutes for an hour because of commercials. And then you’ve got cable, which has the most provocative and daring programming, but has audiences of 1 or 2 million people. They also have a very limited amount of money they can spend without wanting some sort of say or control over the material, which is absolutely repugnant to us in terms of the way we work.But ‘we could get around’ having less control on a Star Wars TV series than they would on a Star Wars movie,” McCallum says. The real issue is that his series isn’t intended for the elementary school set: “Our biggest problem is that these stories are adult. I mean… these are like Deadwood in space. It so unlike anything you’ve ever associated with George before in relation to Star Wars. These aren’t for kids. I mean, we hope they’ll watch, but it’s not being targeted at 8-to-9 year old boys. The situation we have is that each episode – or if you put two hour long episodes together – is bigger than any film we’ve ever done. It’s on the Avatar level and we’ll only have about $5-6 million we can spend on each episode.” McCallum has also likened his Star Wars show in the past to The Godfather and “Empire Strikes Back on steroids,” to give you a better sense of what he’s going for. Although an adult-oriented Star Wars sounds so much appealing, we know that the franchise has generally tried to maintain a PG rating, with the exception of Revenge of the Sith, which had a PG-13 rating. Even the Clone Wars animated series is kid-friendly. It’s disappointing that McCallum is struggling to get a more grown-up series off the ground, but not surprising. So far, there is one thing that won’t represent a problem – George Lucas will have his say in the series, despite his retirement: “No, I think he would do what he did on Young Indy. You hire the best directors, you create the best story you possibly can and then do everything you can to support them in the editorial process. Again, if George wanted to be known as one thing it would always be as an editor. That’s his dream and that’s the part he loves the most. I think I’ve said this before, but writing is so painful for him and he certainly knows there are a lot of you who don’t like his writing (laughs). But they’re his stories and that’s the way he does it, but it’s hard for him.” That may be the good news for those of you who have been attacking Lucas for the prequel episodes, but that will all be irrelevant if the show never gets to be aired. As for me, I’ll keep my fingers crossed hoping for a miracle that would make Lucas do more SW movies.
Continue Reading
Advertisement
You may also like...
Related Topics:avatar, Empire Strikes Back, George Lucas, Revenge of the Sith, Rick McCallum, Star Wars, The Godfather