UPDATE 8/12/2009/ “All About Steve” Poster Added Judging by the trailer for “All About Steve“, it seems to be a typical romantic comedy or better, chick flick. OK, there are much worse movie things then rom-com. But I think Sandra Bullock is a pro who’s usually worth watching. After “All About Steve” opening on March 6, 2009, we will (or not?) see Bullock in her summer’s “The Proposal” romance. Official synopsis: Crossword puzzle constructor Mary Horowitz (Sandra Bullock) is smart, pretty – and a natural disaster that shakes news cameraman Steve (Bradley Cooper) to the core. Set up on a blind date with Steve, Mary thinks the chemistry is undeniable and just knows she’s found her soulmate. She decides to do anything and go anywhere to be with him. Mary’s escalating infatuation is encouraged by the self-serving actions of news reporter Hartman Hughes (Thomas Haden Church) who enjoys torturing his insolent cameraman at every opportunity. As the news team crisscrosses the country covering breaking news stories, Steve becomes increasingly unhinged as Mary trails them. 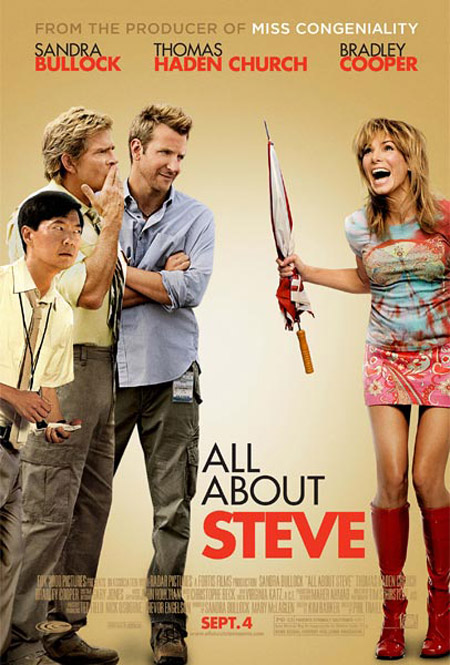 But when the overzealous Mary becomes embroiled in the news story of the year, Steve and Hartman begin to see her differently. Hartman is plagued by guilt knowing his game of one-upmanship with Steve has placed her squarely in harms way while Steve is feeling his own pangs of remorse at his callous behavior. Despite the media storm surrounding her, Mary with her upbeat unaffected manner not only brings everyone together but finds her own oddball friends and discovers her true place in the world. “All About Steve” is directed by Phil Traill from the script by Kim Barker.
Continue Reading
Advertisement
You may also like...
Related Topics:Bradley Cooper, Sandra Bullock