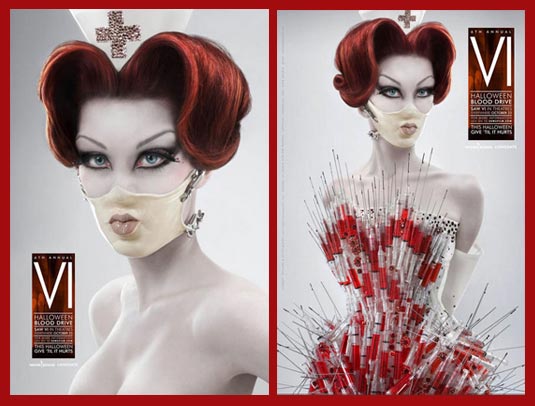 Check out the movie posters for “Saw VI,” starring Costas Mandylor, Mark Rolston, Betsy Russell, Tobin Bell, Karen Cliche, Tanedra Howard, Shawnee Smith. Every year, Lionsgate gets the blood pumping for its new Saw film with the SAW “Give ‘Til It Hurts” blood drive, benefiting the Red Cross. As part of that tradition, the studio produces an ad campaign starring the SAW nurse, a sexy sister of dubious mercy who wants your blood. This year’s ad campaign was created by Ignition Print and was photographed by Co-President of Marketing Tim Palen…and it’s the wildest yet with the SAW nurse sporting a uniform you won’t see at just any old doctor’s office. That’s because it’s designed by the downtown NY fashion darlings The Blonds, the corset kings who have outfitted the likes of Beyoncé, Katy Perry and Rihanna. “Saw VI″ is directed by Kevin Greutert and writen by Patrick Melton and hits theaters on October 23, 2009.