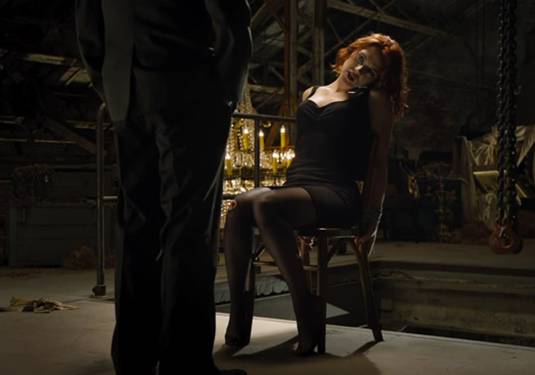 Hey guys, we present a nice little preview clip today for the much anticipated film, Marvel’s The Avengers releasing in theaters and IMAX May 4th, 2012. The Black Widow gets called in from a mission and Scarlett Johannsson seems to have lost none of her bad assery from Iron Man 2. Furthermore, Clark Gregg’s providing the same dead pan humor that has made his character so memorable throughout these movies. In other words, one of S.H.I.E.L.D.’s Agents has been compromised and it’s up to Agent Coulson to contact Black Widow to get her back to the Hellicarrier. Written and directed by Joss Whedon, the superhero team up of a lifetime, The Avengers also stars Robert Downey Jr., Chris Evans, Mark Ruffalo, Chris Hemsworth, Jeremy Renner, Tom Hiddleston, Stellan Skarsgård and Samuel L. Jackson. With a perfect blend of high kicking action infused in the clip, let’s hope the rest of the film turns out the same. Watch out below: [youtube]http://www.youtube.com/watch?v=JCqfncpIjJM[/youtube]
Continue Reading
Advertisement
You may also like...
Related Topics:Chris Evans, Chris Hemsworth, Clark Gregg, Jeremy Renner, Joss Whedon, Mark Ruffalo, Robert Downey Jr., Samuel L. Jackson, Scarlett Johansson, The Avengers, Tom Hiddleston