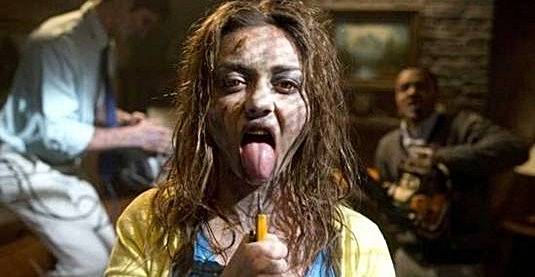 Horror, comedy, parody – and you already know that we’re here to have a little chat about the upcoming Scary Movie 5 (which opens this Friday!) Two brand new TV spots for the movie have arrived, check them out in the rest of this report & as usual – don’t forget to let us know what you think about the whole thing! [youtube]http://www.youtube.com/watch?v=rBSHBWA12EI[/youtube] Malcolm Lee directed the movie from a script he co-wrote with David Zucker, and as we previously reported, this horror-comedy is the fifth film in the well-known Scary Movie franchise. It revolves around a happily-married couple Dan and Jody who begin to notice some bizarre activity once they bring their newborn baby home from the hospital.

…but when the chaos expands into Jody’s job as a ballet dancer and Dan’s career as an Ape researcher, they realize their family is being stalked by a nefarious demon. Together, with the advice of certified experts and the aid of numerous cameras, they must figure out how to get rid of it before it’s too late.

They Rescue The Actors First In First Clip From THIS IS THE END!
International Trailer For THE GREAT GATSBY
Advertisement