Johnny 5 is going to be resurrected, but this time along a teenage girl. The task of directing this remake of the popular 1986 movie (with Steve Guttenberg, Fisher Stevens and Ally Sheedy) has fallen to Tim Hill (Hop) who will also be a co-writer. In the original, two men create a Cold War robot who ‘s struck by lightning, thus gaining a consciousness. The remake will still revolve around the same plot, but the main character will be younger and the setting will be modern world where robots are essential for warfare. Mr Hill stated that “The thing that makes it so relevant is that we live in this age of robots, particularly when it comes to war. We have drones that do our fighting for us, do all these jobs men and women don’t want to do. And that’s what makes this so interesting — things like this moment in the story when Johnny realizes he’s going to be disassembled and contemplates death, and whether it’s right to terminate someone else.” He admits that those are some heavy-themed stuff for a family-friendly movie, but he believes it will work in the set story. 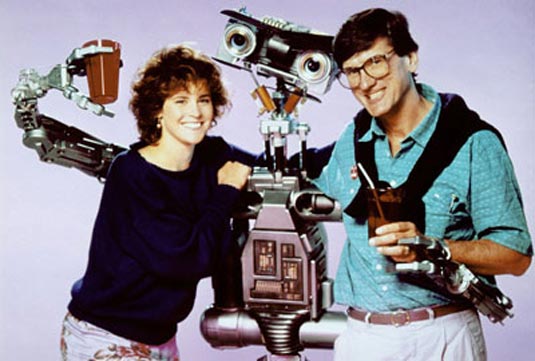 As for the younger lead character, Mr Hill says that it plays with the “wish- fulfillment” of many kids – that they have an all-powerful friend made from metal parts, which will also delve into humans’ current dependency on technology. Of course, Johnny 5 himself will have to go through a bit of ‘touch up’ in order to suit the film’s needs: “I’m tempted to go back and grab the original. But I think it has to be closer to what modern design actually is. There are computer models and labs developing real machines like this. We want to do something like that. You’ve got to find the balance between something fierce and something endearing. The original was cute. But no one was threatened by it.” Will he succeed?
Continue Reading
Advertisement
You may also like...
Related Topics:Fisher Stevens, Tim Hill