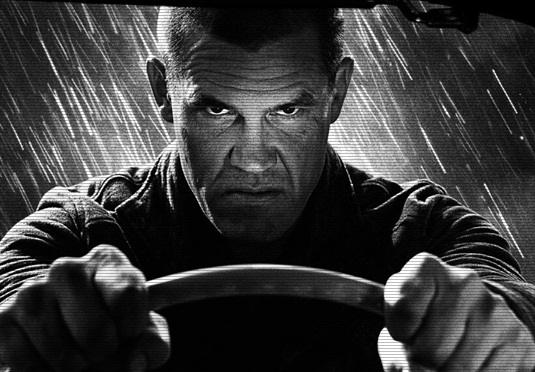 Other than a news about a really sensational cast and terrific crews, we still haven’t seen too much of Robert Rodriguez‘s A Dame to Kill For on his Austin set. Finally the day has come and via his twitter page Rodriguez has released both a set shot and touched-up image of Josh Brolin as Dwight, who was played by Clive Owen in the 2005 original. The first still features ‘bad ass Josh Brolin driving a Rodriguez-mobile. (A green box with a steering wheel bolted on).

The second still should be similar to what we see in the movie:

And here’s a quick photo touch up I do to set a tone for the actors. (Probably won’t be raining in final movie)

Dwight is one of the favorite characters from Miller’s books and the 2005 film. In SIN CITY: A DAME TO KILL FOR, Dwight is hunted down by the only woman he ever loved, Ava Lord, and then watches his life go straight to hell. Chronologically, this story takes place prior to ‘The Big Fat Kill’ (featured in the film FRANK MILLER’S SIN CITY) and explains how Dwight came to have a dramatically different face.