The latest The Crazies photos have hit the ‘Net. David Dutton (Timothy Olyphant) is sheriff of Ogden Marsh, a picture-perfect American town with happy, law-abiding citizens. But one night, one of them comes to a school baseball game with a loaded shotgun, ready to kill. Another man burns down his own house…after locking his wife and young son in a closet inside. Within days, the town has transformed into a sickening asylum; people who days ago lived quiet, unremarkable lives have now become depraved, blood-thirsty killers, hiding in the darkness with guns and knives. Sheriff Dutton tries to make sense of what’s happening as the horrific, nonsensical violence escalates. Something is infecting the citizens of Ogden Marsh… with insanity. Now complete anarchy reigns as one by one the townsfolk succumb to an unknown toxin and turn sadistically violent. In an effort to keep the madness contained, the government uses deadly force to close off all access and won’t let anyone in or out – even those uninfected. The few still sane find themselves trapped: Sheriff Dutton; his pregnant wife, Judy (Radha Mitchell); Becca (Danielle Panabaker), an assistant at the medical center; and Russell (Joe Anderson), Dutton’s deputy and right-hand man. Forced to band together, an ordinary night becomes a horrifying struggle for survival as they do their best to get out of town alive. The drama horror, a remake of George A. Romero’s 1973 cult classic, is directed by Breck Eisner (Sahara) from the script written by Scott Kosar (The Amityville Horror, The Texas Chainsaw Massacre) and Ray Wright (Pulse, Case 39). The film will hit theaters everywhere on February 26, 2010. Click here to view all photos, posters and wallpapers from The Crazies. 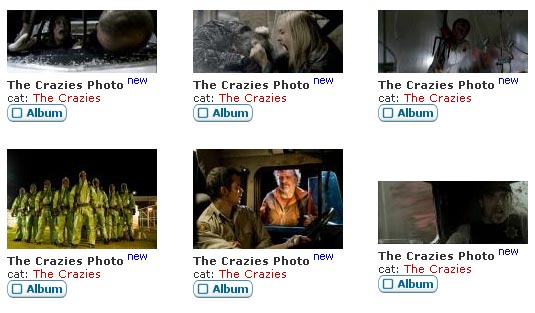