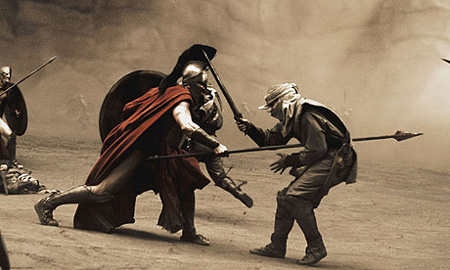 It’s all about 3D in Hollywood right now, so you read this correctly, and Zack Snyder‘s 300 is not an exception. This director has just revealed that Warner Bros has been considering re-releasing 300 in 3D theaters. The studio converted a section of the film to 3D to show Snyder how great the conversion looked and…yeah, you already guess the rest of the story…

“I had a bunch of meetings and basically, what convinced me was that they actually did a conversion of 300. Not the whole thing. I haven’t seen the whole movie but they’re talking about doing the whole movie. I saw maybe like a ten-minute section that they’d just done. By the way, they did an amazing job. The way we shot it actually, it’s almost like a 3D movie anyway, so it really lends itself to that. There is a difference,” Snyder said.

Yeah, well, we must agree that some parts of the movie could look impressive after conversion. Anyway, Snyder also mentioned that Frank Miller is in the process of writing a 300 prequel, Xerxes, which will focus on the first film’s villain. Snyder said Miller is working hard and added:

“I didn’t tell Frank what to write the first time, and I’m not telling him what to write this time. I’ll take it and I’ll adapt it and make it into a movie and I’ll write a screenplay, but I want him to do whatever he thinks. I’m not going to say I’m 100%, like that’s it, but on the other hand, I’m pretty confident it’s going to be awesome. That would be the next thing and then I’m working on a sci-fi thing that Kurt and I are writing together, an original thing.”

Awesome or not, we’ll just have to wait and see…
Continue Reading
Advertisement
You may also like...
Related Topics:300, Frank Miller, Xerxes, Zack Snyder