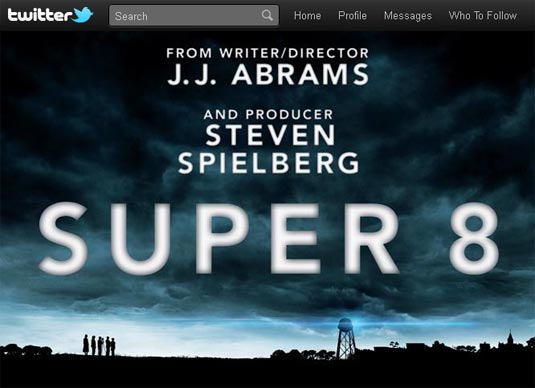 Paramount Pictures and Twitter jointly announced today sneak preview showings of the movie Super 8 for 1-day only on Thursday, June 9th, in advance of the film’s scheduled nationwide release on Friday, June 10th. To promote the sneak previews, the companies have designated the hashtag #Super8Secret, which Paramount has also sponsored as a Promoted Trend, allowing Twitter’s global user base a direct link to buy tickets to the advanced previews. At select, participating theatres in the United States, Super 8 Sneak Preview moviegoers will be treated to a free popcorn (with a concession purchase) at each sneak preview show. Hosting movie sneak previews marks a first for Twitter. This promotion continues a key partnership between Paramount and Twitter on Super 8. The duo joined forces in March for the movie’s exclusive trailer premiere via Twitter, another exciting first for the site.

Super 8, from writer/director J.J. Abrams and producer Steven Spielberg, will open exclusively tomorrow, June 9th, on over 300 screens nationwide, featuring all 239 IMAX playdates in the U.S. and Canada. Fans can go to www.Twitter.com/Super8Movie and use #Super8Secret to share information about the movie with friends. To be among the first to see Super 8, visit www.Super8-Movie.com/Sneak for tickets and show times.

“With Super 8, J.J. and Steven have created a really fun and engaging movie for all ages,” said Rob Moore, Vice Chairman of Paramount Pictures. “We are excited to finally get it out into the marketplace and using this sneak preview promotion with Twitter to kick start the film’s release, is an unprecedented way to get people into theaters and talking about the movie.”

“Twitter is how we hear about new movies and share our tiny reviews before the credits finish rolling,” said Biz Stone, Twitter cofounder. “There are already millions of people talking about SUPER 8 on Twitter and Paramount gets that. Creating more excitement about the film with sneak previews and free popcorn is a smart way to make this film a global conversation even before it’s released.”

“Twitter has the incredible capability of spreading buzz in real-time, as well as fostering communal conversations that encapsulate large audiences in a matter of seconds. We believe these elements are key in promoting a movie like SUPER 8 that has such incredible playability and the potential for unlimited positive word of mouth,”

If you haven’t seen Super 8 trailer, check it out now!