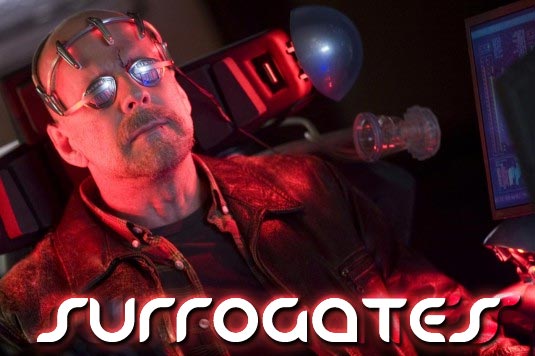 In “Surrogates,” FBI agents (Bruce Willis and Radha Mitchell) investigate the mysterious murder of a college student linked to the man who helped create a high-tech surrogate phenomenon that allows people to purchase unflawed robotic versions of themselves—fit, good looking remotely controlled machines that ultimately assume their life roles—enabling people to experience life vicariously from the comfort and safety of their own homes. The murder spawns a quest for answers: in a world of masks, who’s real and who can you trust? Willis still takes a beating better than any action star in the business. But there are really only two significant action sequences in what’s otherwise a murder mystery set in a future world. Oh, and pretty much everyone now owns a surrogate robot body—usually a blandly prettier version of themselves—through which they can live vicariously, feeling everything good that the surrogate experiences, but insulated from any damage it might sustain…read more [Comcast] Except a snazzy new weapon has been devised, by enemies of the state unknown, which can frazzle these androids and simultaneously melt the brains of their human puppeteers. Willis and his partner (Radha Mitchell) must find the culprits. This comic-book transfer has a premise which feels limply derivative of any number of Philip K Dick adaptations, but it’s passable, thanks to the wit and graft of capable genre technician Jonathan Mostow (Breakdown, T3). The action scenes feel curtailed and a little cheesy, but it has veneer of day-glo creepiness which holds the attention…read more [Telegraph.co.uk] SURROGATES didn’t f*ck around. By the time the opening credits were done, it had already set me up for its gay old time. The action started right off the bat and the flick (which ran at meek 88 minutes) rarely stopped for a pee break yet alone for air or a healthy session of muff diving. I totally dug the concept of this one and could relate to its themes: isolation due to technology, fake human contact (them through surrogates, me via the web) and the cons that come with this type of lifestyle (so many to list). If I may deviate for a second…just a second: being that I work online, my life is 75% spent on the computer. This year I took a week off, away from technology to just “be and straight up, it was the happiest week of my year. All that to bark, Surrogates addressed that box which technology has put us in, hence acting as a potent enough cautionary tale. I’m done, wasn’t that bad was it? …read more [Joblo, The Arrow Reviews] Surrogates is a brilliant example of how thought provoking and fascinating science fiction can be when done right. The tale of lost humanity at the expense of technology is a thrilling, absorbing and suspenseful ride that is made all the more believable by the always dependable Bruce Willis. Combining elements and ideas from all the genre greats, including The Matrix, Total Recall and Blade Runner, the movie looks beyond the meaningless explosions and destruction that have dogged sci-fi in recent times to tell a story of substance. This makes all the action scenes deeply rooted in character development and simply add to what is one of the genre highlights of the year… read more [TheVine.com.au] Produced by Disney, “Surrogates” is one step removed from a cartoon. And I don’t mean “WALL-E.” An intriguing premise is squandered on a routine murder mystery and heavy-handed metaphors for how humanity sacrifices personal connection in favor of technology (how thought provoking!). For awhile the movie is as laughable as the blonde wig decorating the Willis-surrogate’s head (in an uncomfortable decision for both Willis and the audience, he’s surrounded by younger, better looking co-stars as the movie stresses the physical perfection of surrogates). Rhames overacts to a ridiculous degree, the special effects make “G.I. Joe” look groundbreaking, and the garish cinematography is a visual nightmare of Dutch angles and oversaturated colors. But the movie is ultimately too boring to rival the greatest campy sci-fi misfires. By mixing a detective story and futuristic robots the filmmakers were likely aiming for the next “Blade Runner.” They wound up with the next “Battlefield Earth.”…read more [Metromix Chicago]

Willis’ character Greer starts off the investigation in his surrogate until it gets fried and destroyed in one of the film’s really cool chase scenes. The surrogates themselves remind me of The Matrix and have the same leaping abilities as Hugo Weaving’s Agent Smith. It was really cool. The film’s action is top notch. The 2nd half of the movie is Greer outside in his human form in what is now the surrogate world trying to solve the film’s mystery…read more [LatinoReview] The film’s singular flaw is that its driving conspiracy is a little pedestrian. Anyone who doesn’t know who the bad guy is before the end is half-asleep. But there are so many far out concepts being introduced in this film, it would almost be a disservice to have too sophisticated a narrative. So, am I saying that other than the movie’s plot, it’s good? Startlingly, yes, I suppose that is what I am saying. I’m far more intrigued by seeing how the military – or a marriage – changes with the use of this new technology than by wondering who is really behind the conspiracy to take society down…read more [UGO]

With the exception of Willis, who effectively trots out his wary but determined Everyman persona once his well-scrubbed substitute goes MIA, the actors are mostly required to look great and behave with a certain glacial impenetrability, which Mitchell, Pike, Boris Kodjoe (as an FBI supervisor) and James Francis Ginty (as Canter’s surrogate) lead the way in doing. Devin Ratray gets good mileage out of his role as a computer whiz too proud of his corpulent geekiness to consider a more glamorous substitute…read more [Variety] Surrogates Video Review (Jordan Hoffman):
Continue Reading
Advertisement
You may also like...
Related Topics:Bruce Willis, Jonathan Mostow, Radha Mitchell, Surrogates