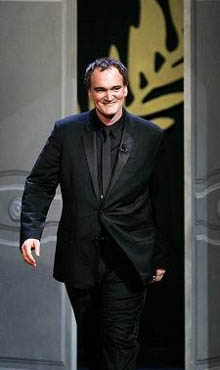 Quentin Tarantino delivered an expletive-laden Cinema Masterclass at Cannes Thursday in which he mixed tips on movie-making with reflections on his own greatness. “At the end of the day if there’s one thing I’m doing it’s forging a new type of comedy,” he said, noting that his violence-filled oeuvre gave people a “thrill” because it made them “laugh at things that aren’t usually funny.” “Trying to make a feature film yourself with no money is the best film school you can do” he said, recounting how he spent three years making his first film during his weekends off work. Spaghetti westerns, kung fu flicks and Brian da Palma were his inspiration, said Tarantino, who took home the Cannes film fest’s coveted Palme d’Or award in 1994 for “Pulp Fiction.” Tarantino fits his own films into two categories: There are the hyper-realistic movies like his 1992 debut feature “Reservoir Dogs,” a botched jewel heist story whose ensemble cast includes Harvey Keitel and Tim Roth, and “Pulp Fiction,” another crime drama starring John Travolta, Samuel L. Jackson and Uma Thurman. And then there are the “movie movies,” he said, which include the two “Kill Bill” films and “Death Proof,” which pay tribute to genres such as martial arts movies, samurai movies and serial killer films. “I look on ‘Kill Bill’ as my ‘Apocalypse Now‘,” he said. Tarantino, whose “Death Proof” last year failed to scoop the Palme d’Or here, is noted for the use he makes of music, picking pop classics or music from cult television series. “I have one of the best soundtrack collections in America. I just don’t trust any composer to do it. Who the fuck is this guy coming in here and throwing his shit over my movie. What if I don’t like it? And the guy’s already been paid!”. Previous directors who have given the Masterclass here include Martin Scorsese, Nanni Moretti, Wong Kar Wai and Sydney Pollack.

“I want to make movies, I have to make movies. The reason I don’t make more movies is that I want to live life in between. I give it all to the movies, and it’s like I’m climbing Mount Everest every time. When I get off the mountain then I want to be able to enjoy some time in the chalet at the bottom. But the real, real reason I don’t want to make more movies is that I’m a writer, and I always have to start with the blank page and that’s hard. Nothing you’ve done before means a damn when you’ve got to start all over again.” Quentin Tarantino

Continue Reading
Advertisement
You may also like...
Related Topics:Quentin Tarantino