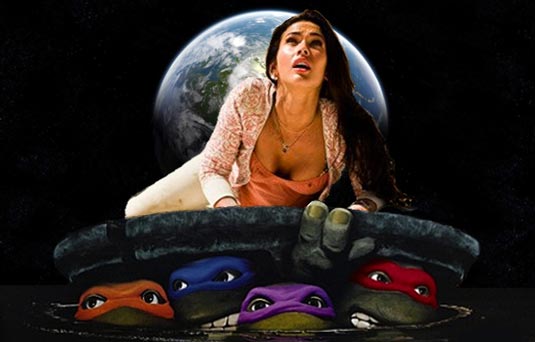 Noooo, no one could possibly see THAT coming! Yeah, the upcoming movie based on Teenage Mutant Ninja Turtles series has been somewhat of a hot topic among fans, and now the name is officially changed. Most fans seem to be unsatisfied with it (duh! They wanted to turn the turtles into aliens!), and they are laying the blame, of course, on Michael Bay who is serving as producer and who has, apparently, got too much alien-y stuff to his brain. At one point, it was announced that the Jonathan Liebesman-directed movie would simply be called Ninja Turtles, but have no fear, ’cause the power of the Internet is (sometimes) great! Namely, at the recent CinemaCon, a logo was spotted for the film, showing the original title Teenage Mutant Ninja Turtles. This title change is a ‘smart move’ for the studio as the fans of the franchise will appreciate.. well, not appreaciate but at least be less angry about. It was also previously rumored that the film’s script has had massive rewrites since it leaked onto the internet a while back. If they’ve put the word “mutant” back in the title, does that mean that they have been changed back from aliens to mutants, as they should be? I must say that I have my doubts, especially with Megan Fox as April O’Neil and explosions-and-army-happy Bay involved, but we are yet to see what will become of it. Teenage Mutant Ninja Turtles is due in theaters on June 6th, 2014 and it also stars Alan Ritchson, Noel Fisher, Will Arnett, Danny Woodburn, Jeremy Howard and Pete Ploszek.