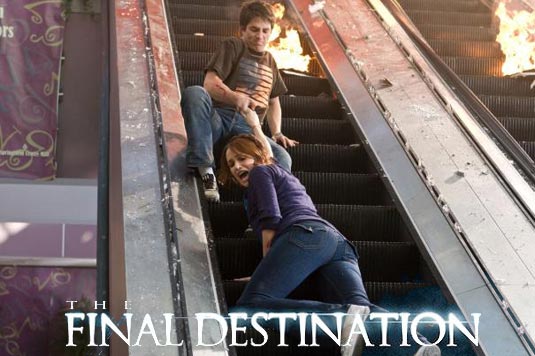 The trailer for the “The Final Destination,” fourth installment in the “Final Destination” franchise, has appeared online. The difference this time around is that it’s in 3D. Synopsis: On what should have been a fun-filled day at the races, Nick O’Bannon has a horrific premonition in which a bizarre sequence of events causes multiple race cars to crash, sending flaming debris into the stands, brutally killing his friends and causing the upper deck of the stands to collapse on him. When he comes out of this grisly nightmare Nick panics, persuading his girlfriend, Lori, and their friends, Janet and Hunt, to leave… escaping seconds before Nick’s frightening vision becomes a terrible reality. Thinking they’ve cheated death, the group has a new lease on life, but unfortunately for Nick and Lori, it is only the beginning. As his premonitions continue and the crash survivors begin to die one-by-one–in increasingly gruesome ways–Nick must figure out how to cheat death once and for all before he, too, reaches his final destination. The film marks the latest in the highly popular Final Destination series, and its first 3D installment, giving horror fans an especially visceral thrill ride. David R. Ellis, who helmed “Final Destination 2”, is back as the director in this fourth movie. Starring Krista Allen, Nick Zano, Mykelti Williamson, Shantel VanSanten, Stephanie Honore, Bobby Campo, Haley Webb, Tina Parker, Billy Slaughter, Phil Austin, Cecile Monteyne, and Jessica Ritchie. “The Final Destination” opens August 28th, 2009.
Continue Reading
Advertisement
You may also like...
Related Topics:bobby campo, David R. Ellis, Final Destination 4, shantel vansanten