The Amazing Spider-Man, an upcoming Marc Webb-directed superhero film, based on the comic book of the same name, has uncovered two more new stills. While most of the previously released images focus on Marvel superhero Peter a.k.a Spidey (Andrew Garfield) or Peter Parker’s main squeeze Gwen Stacy (Emma Stone), the newly-released official photos put supervillain The Lizard (Rhys Ifans) under the spotlight. Well, one photo shows the reptilian villain wearing his famous lab coat and strangling some poor soul around the neck, while on the other holding what looks like a camera with the words ‘property of Peter Parker’ stamped across it; it appears to be a shot of the serpentine evildoer’s scaly claw. The Lizard a.k.a Dr. Curt Connors is described as ‘one of the leading scientific minds’ who aims to engineer a revolutionary regeneration serum to help re-grow limbs and human tissue. It seems that something has gone horribly wrong… The action adventure, opening in 3D, 2D and IMAX 3D theaters on July 3rd, 2012, also stars Denis Leary, Campbell Scott, Irrfan Khan, Martin Sheen and Sally Field. Check out two new stills Sony Pictures have debuted via Apple and wait for tomorrow’s new Amazing Spider-Man trailer. 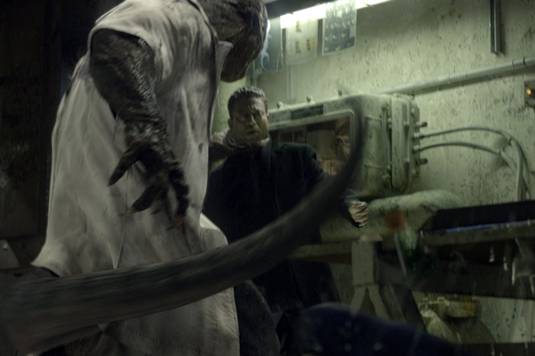