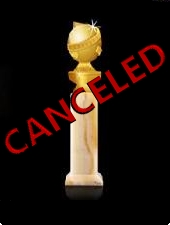 Reuters has just reported : “The traditional gala ceremony for Hollywood’s annual Golden Globe Awards for film and television will be scrapped in favor of a “press conference” carried live by NBC News, organizers said on Monday. Cancellation of the usual three-hour-plus show sponsored by the Hollywood Foreign Press Association marks the latest casualty of the nine-week-old strike by screenwriters against the major film and TV studios. Jorge Camara, president of the roughly 90-member HFPA said the group was “very disappointed” about the change. “We take some comfort, however, in knowing that this year’s Golden Globe Award recipients will be announced on the date originally scheduled,” Camara said in a statement. The Writers Guild of America has said it would picket the Golden Globes unless the studios returned to the bargaining table to resume contract talks that collapsed last month in a labour dispute that hinges on how writers should be paid for work distributed over the Internet. The WGA’s sister union for performers, the Screen Actors Guild, has said nearly all of its members would boycott the Globes rather than cross picket lines to attend the ceremony, often a key indicator of possible contenders for Hollywood’s top film awards, the Oscars. As a result, organizers of the Globes said the event will now be held as previously planned on January 13. But instead of a typical ceremony in which winners accept their awards on stage, they will be presented during a one-hour press conference. The one-hour event will be covered live by NBC’s news division, rather than its entertainment branch, in a live broadcast from the Beverly Hilton hotel, organizers said. Already, the strike has thrown the television industry into disarray with many shows ending production. Several films have been postponed and one other awards show, the People’s Choice honours, changed its format”
Continue Reading
Advertisement
You may also like...
Related Topics:Hollywood