Sony has revealed the logo for Seth Rogen penned “Green Hornet” comic book adaptation film to be released on June 25, 2010. 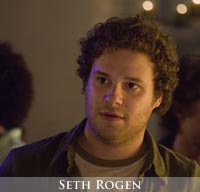 The story follows the adventures of Brit Reid. A wealthy publisher of The Daily Sentinel by day, Reid roams as a masked crime fighter by night, dedicated to protecting the lives and rights of the city’s citizens. Reid is accompanied by Kato, a chauffeur/bodyguard/personal assistant during business hours who transforms into a masked sidekick with a knack for martial arts when the sun goes down. Rogen is expected to address audiences at San Diego Comic Con in July and may possibly field questions about his writing progress on this. He’ll be there promoting his August release of Pineapple Express.
Continue Reading
Advertisement
You may also like...
Related Topics:The Green Hornet