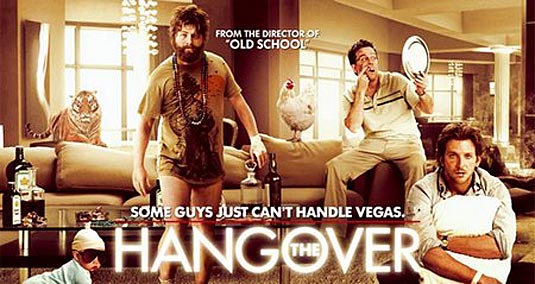 “The Hangover” is a worthy entrant into the “guy movie” hall of fame. It’s got laughs, drugs, tomfoolery, bodily harm, strippers, and a Mike Tyson cameo. If you were going down the list of things needed for a comedy to take flight you’d find them all here; the three main players pass the ball, the chemistry works, and the film never devolves into that most debilitating trope of the romantic comedy – a serious third act. If you’re a fellow, or the person who monitors your fellow’s entertainment intake I highly recommend giving this a watch. It’s nicely done. 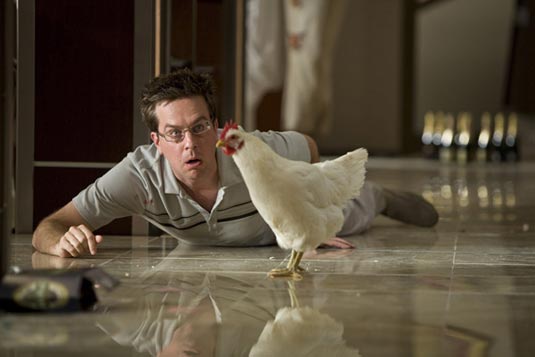 Essentially, The Hangover follows three amnesiac groomsman the day after a debaucherous bachelor party as they track down the origins of a series of clues that they hope lead them to the lost groom, Doug (Justin Bartha). Phil (Bradley Cooper) is a schoolteacher who resents the family life that has stripped him of the wild antics he enjoyed as a youth. He needs this party bad, and forces the gang to go to excess, an act that only bites them in the ass later. Stu (Ed Helms), Phil’s cautious foil, is extremely pussy-whipped by a girlfriend that no self-respecting man would put up with for no longer than one roll in the hay. He’s the conscience in the film that only seems to get trampled on and distorted. Doug’s future brother-in-law, Alan (Zach Galifianakis), is the odd duck. Phil and Stu aren’t really his friends, but he’s so desperate for male camaraderie that he’d follow these guys anywhere, as long as he gets to carry his male-purse that he refers to as a satchel – like the one Indiana Jones carries…read more [Screen Junkies] The Hangover falls victim to having it’s best laughs in the trailer, something most comedies walk right into. Todd Phillips’ new film also lets a few gags run on too long and it features subplots that are unnecessary. Yet with all of this, it’s hard not to laugh at it when it hits the right notes with jokes or be swept up in the command Bradley Cooper has as the lead. Unlike the recent What Happens in Vegas, The Hangover has the ingredients needed to make a good and often hilarious comedy and actually takes place in Vegas for longer than five minutes. Dare I say, The Hangover is the best Vegas comedy and certainly is the best comedy of the year…read more [atomic popcorn] If you were to take a look at Todd Phillips’ filmography, you’d notice a particular trend in regards to the types of movies he’s usually involved with. He may not be the world’s greatest director, but he does know how to cater to the frat boy audience with comedies that are lewd, crude and blisteringly funny. His latest movie, “The Hangover,” is made in the same vein as past hits like “Road Trip” and “Old School,” only this time, he doesn’t just push the boundaries in terms of what you can get away with in an R-rated comedy – he shoves them right off the edge. Wildly absurd and entertaining, “The Hangover” may not be the epic comedy that many expected, but it’s still a great buddy flick that could be the surprise hit of the summer…read more [Bullz-Eye]

I laughed a lot with THE HANGOVER. I really like my comedies dark, and as far as this one goes, it is pretty damn murky. But I did have a couple of beefs with the film in terms of the final act. I appreciated the humor so much in the first two that I sort of felt it played it too safe as the conflicts were resolved. As much as I liked these guys, I would have loved to see a little bit of the black humor continue up until the end. It seemed much too polite, and a tad bit predictable. And I would’ve liked to have seen the husband to be get to have a little more fun. It seems like Justin Bartha was given the shaft when it came to really fleshing his character out. And yes he is missing for much of the film, but I liked his performance and it would have been fun to see him have a little bit more to do. But even with these minor complaints, The Hangover is easily one of the funniest films so far this year. …read more [Joblo] 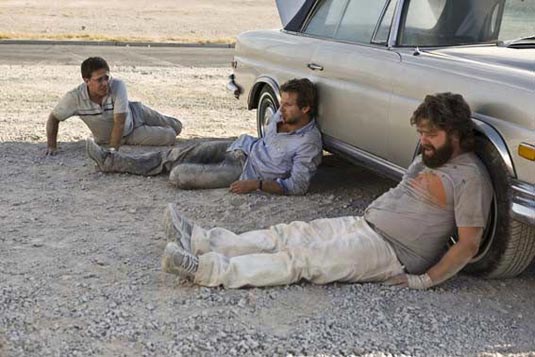 It’s worth noting that The Hangover severely fails its few female characters, from the hilarious Rachael Harris as the meanie girlfriend to Graham, who is warmer and funnier in her few scenes than she’s been in years, but gets abandoned to take care of the baby so the guys can continue on their adventure. Why couldn’t she come along? Why can’t the guys treat women as anything other than objects or the ol’ ball-and-chain? Sure, this is a movie about men and their weird bonding rituals, and throwing in a token girl might have ruined the beautiful vibe between the three leads. But as another entry into the “real men secretly fear women” canon of guy comedies this decade, The Hangover feels like a continued step in the wrong direction…read more [Cinema Blend] The Hangover is a movie based almost entirely on comic surprise. When our hapless overgrown boys wake up in their expensive Vegas hotel suite, the detailed destruction that inexplicably took place the night before is stupefying. An enormous pyramid of empty beer bottles overseen by a confused rooster is a mere intro to a labyrinth of unexplained circumstances. An abandoned infant and a bathroom-ensconced tiger deliver an immediacy to the plight of three guys who you’d be just as likely to meet at a bar in Los Angeles or New York…read more [City Beat] 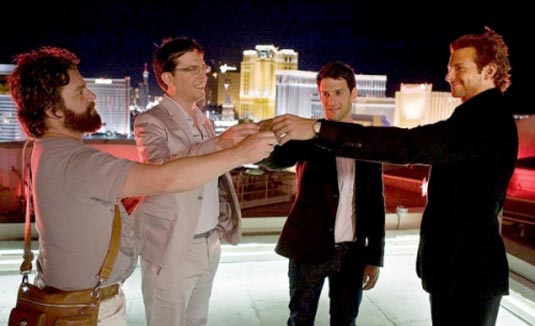 The surprises in this movie are everything, so without giving much away, I’ll just say that a Vegas chapel figures into the mix. So does a crowbar-wielding Asian gangster (Ken Jeong) who might be the epicene brother of Long Duk Dong in Sixteen Candles. There’s also a juicy run-in with Mike Tyson. The Hangover has scattered laughs (many in the cathartically funny end-credit montage), but overall it’s more amusing than hilarious. The most deftly acted character is Stu, played by Helms with a realistic alternating current of horror and liberation. As Alan, Zach Galifiannakis makes blinkered idiocy a cartoon rush, though a little of him goes a long way. I wish Phillips, working from a script by the knockabout team of Jon Lucas and Scott Moore (Ghosts of Girlfriends Past), had nudged the characters closer to being a true shaggy-dog Apatow-style ensemble. You’re always a little too aware that they’re types. But it’s fun seeing each of them have the ”fun” they deserve…read more [EW]
Continue Reading
Advertisement
You may also like...
Related Topics:Bradley Cooper, Ed Helms, Justin Bartha, The Hangover, Todd Phillips, Zach Galifianakis