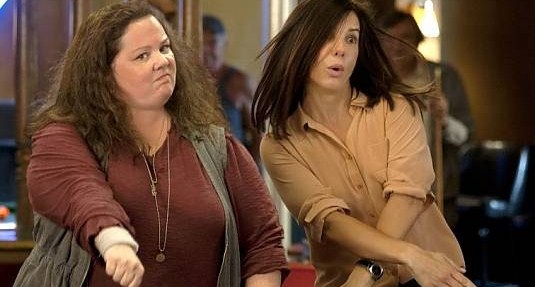 The fed. The fuzz. The Heat! Ready for this one? C’mon, give them a break, I think that Sandra Bullock and Melissa McCarthy look pretty cool in this one. Anyway, the movie is set to hit theaters this month, it comes from Bridesmaids helmer Paul Feig, so what could possibly go wrong? So, as we previously reported, Feig directed the movie from a script written by Katie Dippold, which revolves around FBI Special Agent Sarah Ashburn and Detective Shannon Mullins who team up to take down a Russian mobster. Of course, there’s more: Bullock’s character Sarah is an uptight and arrogant methodical investigator, while McCarthy’s Shannon is foul-mouthed and has a very short fuse. What a combination! Neither has ever had a partner, or a friend for that matter, but when these two wildly incompatible law officers join forces to bring down a ruthless drug lord, they become the last thing anyone expected: buddies. Beside Bullock and McCarthy, The Heat cast also includes Demián Bichir, Marlon Wayans and Michael Rapaport, and the movie is set to hit theaters on June 28th, 2013. Let us know what you think about this comedy, and stay tuned for even more updates!