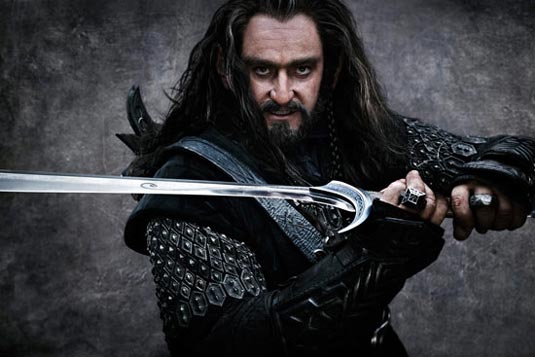 With Peter Jackson already confirming his adaptation of Tolkien’s The Hobbit as three films instead of two, a considerable discussion among fans has begun, as to what parts of the epic story each film will encompass. While Jackson has already revealed his third film (titled There and Back Again) will be compromised mostly of secondary Tolkien writings – serving as a bridge between The Hobbit storyline and The Lord of the Rings – the bigger question is where the first film (An Unexpected Journey) will end and where the second film (Desolation of Smaug) will begin. Some of the production’s cast and crew have given teases as to where the act-break might take place. Benedict Cumberbatch (who voices the dragon Smaug) even hinted at the first film’s final shot, but there’s still some mystery as to what will make up each film’s core plot. Regardless of where the films separate though, fans know they are in store for some very exciting story beats, from ‘Riddles in the Dark’ to the Misty Mountains to a showdown with a troop of goblins. Those goblins however, have been taking a backseat in favor of more recognizable elements of Tolkien’s universe, but today we may have a brief sneak-peek at not just a goblin thug, but also the Great Goblin (or Goblin King), thanks to the people over at The One Ring Tolkien fan site, who have come across what they claim to be an action figure images of the Great Goblin. Also included on the packaging is a look at one of the Great Goblin’s minions.

In The Hobbit novel, the Great Goblin captures Bilbo and his dwarf companions as they are passing deep through the Misty Mountains, and we won’t reveal more than that – but you are free to read it if you haven’t already, by some weird twist of fate. It’s certainly a highlight of the book, and will make for a perfect major action sequence in what we presume will be the first film. The images of the Goblin King and his minion are hard to confirm as part of The Hobbit‘s production, but their design aesthetic really suits to what we’ve seen of villains thus far. It’s also worth pointing out that The Lord of the Rings‘ goblins had a greenish tint to their skin, whereas these goblins are more flesh-colored. Furthermore, the brief line of text with the Goblin King image suggests this is actually part of some sort of board game, but even then, this could still be what the final creature will look like. According to another fan site, Heirs of Durin – based on the design of the goblin — this image from The Hobbit behind-the-scenes video blogs could be a goblin in the making, but if so, is in its early stages of make-up and effects. The Great Goblin on the other hand, who is to be played by legendary Australian actor Barry Humphries (better known for his alias Dame Edna), has already been revealed to be a creation not unlike Gollum: a CGI character informed by an on-set motion-capture performance.