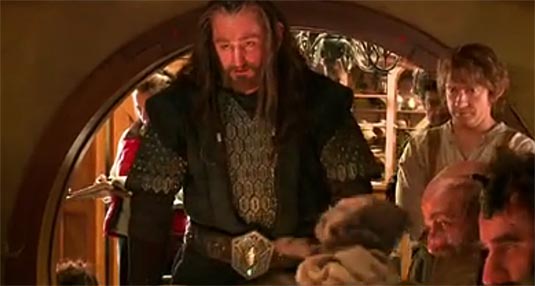 Peter Jackson has posted the third production video blog from the set of “The Hobbit,” letting us sit in on rehearsals and giving us a look at some of the characters who will make an appearance in the two films. The videos features plenty of footage from the first block of shooting on the film, dwarves aplenty, Pinewood Studio’s England and some familiar faces such as Elrond (Hugo Weaving), Galadriel (Cate Blanchett) and Saruman (Christopher Lee). He also made a somber announcement that The Hobbit would not have a presence at this weekend’s Comic-Con.

Good news and bad news today. Bad news is that we won’t be doing any Hobbit presentation at Comic Con in San Diego this year. New Line and Warner Bros were very happy to support a presentation, but I declined, simply because I felt it was too early. There’s so much more of the films still to shoot. I just wanted to get that out there, because I’ve seen various references to the possibility of something Hobbity at Comic Con. Hate to disappoint anyone. But something tells me we will be there in force next year.

“The Hobbit: An Unexpected Journey” hits screens worldwide from December 14th, 2012. Part 2 of the story, “The Hobbit: There and Back Again” debuts the following year from December 13th, 2013.
Continue Reading
Advertisement
You may also like...
Related Topics:Cate Blanchett, Christopher Lee, Hugo Weaving, Peter Jackson, The Hobbit