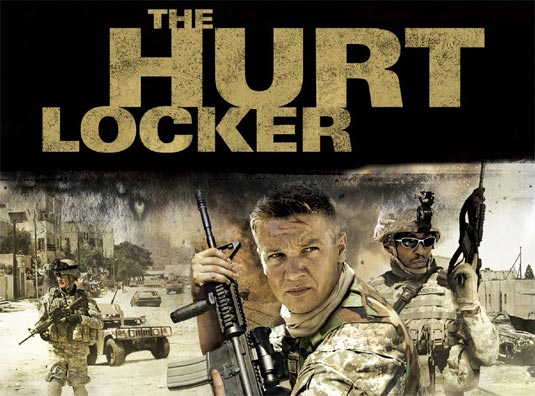 The Hurt Locker is easily the best of the movies which have focused on the ongoing war. Skillfully directed by Kathryn Bigelow, Locker is both a psychological portrait and an exciting action film. It captures the complexities of the war in Iraq with visceral suspense as well as explosive battle sequences and powerful performances. By taking a close look at a trio of courageous but also very human soldiers, it brings the conflict to life in a way that no previous movie has managed to do…read more [USA Today] What a shame that the one movie about the Iraq war that has a chance of being viewed by a large worldwide audience should be so disappointing. According to press reports, members of the Academy of Motion Picture Arts and Sciences finally found a movie about the Iraq war they liked because it is “apolitical.” Actually, “The Hurt Locker” is just the opposite; it’s an endorsement of the politically chauvinistic view that the world is a stage upon which Americans get to deal with their demons no matter the consequence for others…read more [TruthDig] The Hurt Locker probably isn’t the ‘great’ Iraq film which will finally move audiences into theatres but it does play out like fragments of one. Kathryn Bigelow holds pieces of the jigsaw in this impressionistic, tense war drama shot at street level, but commercially The Hurt Locker is facing down the public’s well-documented indifference to Iraq fare without the armour of star wattage (Fiennes, Morse and Pearce all have brief cameos). In reality, the lack of known faces works in The Hurt Locker’s favour, but whether audiences can be persuaded to take the risk is another matter and the all-male cast and testosterone-fuelled subject matter restricts the demographic…read more [Scren Daily] The Army bomb-disposal specialist so memorably played by Jeremy Renner in the extraordinary battlefield drama The Hurt Locker operates with the swagger of a hothead in a job that depends on cool. That cowboy attitude exasperates one combat-weary member (Anthony Mackie) of his Baghdad-based Bravo Company team and frightens another (Brian Geraghty) to furious tears. What’s the source of this grim bravado? Is this decent man’s addiction to adrenaline the cost to today’s American soldier of volunteering for such a crazy assignment, one that requires a husband with a family thousands of miles away to lie down in the road in the hot sun next to a live bomb to disarm a deadly device while locals whose language he can’t understand stare impassively?…read more [EW.com] Kathryn Bigelow’s Iraq War drama The Hurt Locker is a full-throttle body shock of a movie. It gets inside you like a virus, puts your nerves in a blender, and twists your guts into a Gordian knot. Set during the last month in the year-long rotation of a three-man U.S. Army bomb squad stationed in Baghdad, it may be the only film made about Iraq—documentary or fiction—that gives us a true sense of what it feels like to be on the front lines of a war fought not in jungles but in cities, where bombs rise up from the ground instead of raining down from the sky, every narrow alley portends an ambush, and every onlooker is a potential insurgent. It’s an experiential war movie—one that calls to mind the title of the 1950s docudrama series You Are There—but also a psychologically astute one, matching its intricate sensory architecture with an equally detailed map of the modern soldier’s psyche, a diagram of what motivates the volunteers in a volunteer army…read more [Village Voice] The film begins by introducing a very small number of characters—three members of an elite bomb-disposal squad in Iraq—then instantly plunges them into an impossibly tense situation, as a robot designed to defuse bombs malfunctions and a soldier, Sgt. Matt Thompson (Guy Pearce) is forced to get way too close to a ticking IED. Sgt. Thompson either gets blown to smithereens or doesn’t (you think I’m going to tell you?), and then this unbearably anxiety-provoking situation repeats itself, with slight variations in the type of bomb being approached and the person approaching it, over and over again for the next two hours. By keeping its scale miniature instead of epic (there are no combat scenes in the traditional sense), The Hurt Locker keeps its audience in a constant state of tension without risking battle fatigue. But the main advantage The Hurt Locker has over conventional war epics is the richness of its characters. The members of the Explosive Ordnance Disposal team aren’t hastily sketched cannon fodder or iconically heroic bores but damaged, blustering, certifiably crazy, and admirably brave men…read more [Slate]

The Hurt Locker Posters
“The Hurt Locker” has the killer impact of the explosive devices that are the heart of its plot: It simply blows you apart and doesn’t bother putting you back together again. Overwhelmingly tense, overflowing with crackling verisimilitude, it’s both the film about the war in Iraq that we’ve been waiting for and the kind of unqualified triumph that’s been long expected from director Kathryn Bigelow. Bigelow has been on critics’ watch lists since her hallucinatory early films “The Loveless” and “Near Dark.” But until now she’s never had a subject that so successfully utilized her gift for stylized suspense and what she calls “heightened emotional states” as this tale of a three-man U.S. Army bomb squad (tautly portrayed by Jeremy Renner, Anthony Mackie and Brian Geraghty) deployed in the terrifying streets of Baghdad…read more [LA Times]

The Hurt Locker Poster In “The Hurt Locker,’’ Bigelow finds unexpected ways to express empathy and sensitivity. Rather than trace the path a bullet takes to its human target, she focuses on the dance a casing does after it’s left a rifle. The movie manages not to glorify war. It even implies that James is addicted to the role he plays in this one. But what we’re allowed so vividly to see and feel when James disarms a bomb is almost no different from watching a conductor seduce an orchestra or a chef produce a meal. It moves him. That’s a feeling both distinct from war and inextricable from it…read more [Boston.com] “Story” is perhaps misleading, as The Hurt Locker, very little interested in character backstory or conventional plot, charts a series of missions, some more successful than others, with only the occasional interlude of drunken roughhousing. There’s a sameness to the action (if not the particulars or the consequences of) that perfectly mimics what awaits the explosive ordnance disposal squad every time the three-man team pulls up to a job in their Humvee: every day another bomb, or 10, to dismantle, and every day another chance to get blown into a million itty bits. The three-person squad is comprised of the team leader, Staff Sgt. William James (Renner), thrill-seeking and damaged in an unarticulated way; Sgt. JT Sanborn (Mackie), the sensible, upright one who simply wants to ride out this tour in one piece; and Specialist Owen Eldridge (Geraghty), just a kid, really, who is starting to crack under the strain of the ceaseless violence and the seeming randomness of who lives and who dies…read more [Austin Chronicle]
Continue Reading
Advertisement
You may also like...
Related Topics:Anthony Mackie, Guy Pearce, Jeremy Renner, Kathryn Bigelow, The Hurt Locker