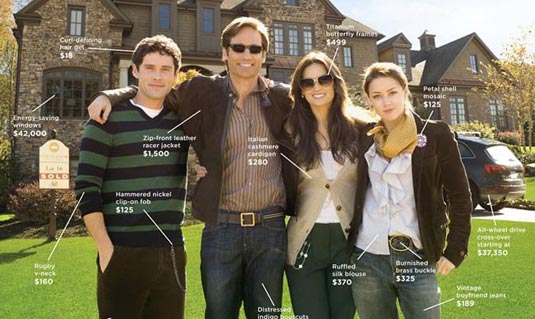 Check out the trailer and two posters for the upcoming comedy-drama movie The Joneses. Director Derrick Borte begins the film by showing us ourselves – or at least who we often aspire to be. We meet Steve Jones (David Duchovny), his wife, Kate (Demi Moore), and their children Jenn (Amber Heard) and Mick (Ben Hollingsworth) as they move into their monster home in an affluent suburb of a city somewhere in America. Friendly, confident and very good-looking, they are also loaded with the coolest, newest stuff. The Joneses are much more than just the new neighbours. Within days, all four family members have insinuated their way into the community. Their most dedicated fans are their next-door neighbours Larry (Gary Cole) and Summer (Glenne Headly), a couple devoted to each other yet prone to keeping secrets as well. Despite the Joneses’ success integrating into the community, soon the fissures in their family begin to spew. But it’s not until an outright catastrophe occurs next door that they are forced to make choices about their priorities.

The Joneses Poster The Joneses is planned to be released in limited U.S. theaters on April 16, 2010. You can watch the trailer below:
Continue Reading
Advertisement
You may also like...
Related Topics:Amber Heard, David Duchovny, Demi Moore, gary cole