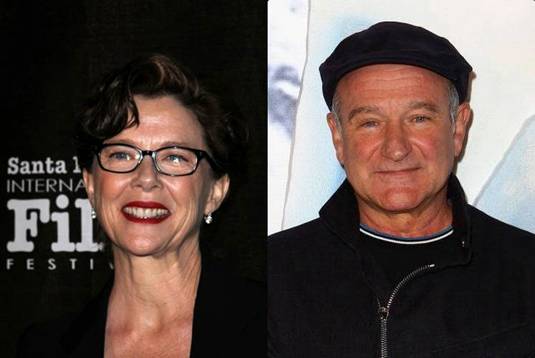 The movie recently switched places one legendary actress for another as Hollywood.com has learned that Annette Bening taking Diane Keaton‘s place in Arie Posin‘s romantic comedy The Look of Love. Vet Robin Williams has also joined Ed Harris  for a role, which is not specified yet. Bening will play the role of ‘Niki, a widow who falls for a new man (Harris) who looks identical to her deceased husband.’ If you are familiar with Posin‘s previous film, the dark satirical film The Chumscrubber, then you will be glad to see him making his return after seven years with such an ace cast lined up for his next directorial effort. Posin described the film that he co-wrote with Matthew McDuffie as:

…movie about the hope that love can strike at any age, and that it’s possible to love deeply, lose terribly, and still love again. This project will rely heavily on the humanity and honesty of its actors, and I cannot imagine two finer actors in the world than Diane Keaton and Ed Harris to entrust with the telling of this story.

The Look of Love is aiming for a spring shoot and should come out sometime next year. Bening recently starred in the acclaimed The Kids are All Right and she has maintained a very busy schedule of movies such as Imogene with Kristen Wiig, He Loves Me, Bomb, The Great as well as Hemingay & Fuentes also on deck. [youtube]http://www.youtube.com/watch?v=97sCzmg2mUE[/youtube]