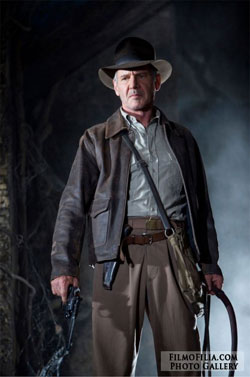 Valentine’s Day is known around the world as the lovers’ day, but to Indiana Jones’ fanatics, 2008 Valentine means the theatrical trailer release day of “Indiana Jones and the Kingdom of the Crystal Skull”. And, now, the clear bootleg version of the trailer can be watched online. Though similar to the description outed earlier, the trailer released on the theaters is pretty much different from the leaked information. Opened with a Paramount logo followed by Lucas Film logo, the trailer began showing clips of the film with taglines, “He protected the power of the divine…He saved the cradle of civilization…He triumphed over the armies of evil.” Then, moments after a silhouette of Indy wearing his hat grazed the screen. Starring Harrison Ford, Shia LaBeouf and Cate Blanchett, Indiana Jones 4 is slated for release on May 22. The official trailer of the action adventure film will be outed on Friday, February 15. But, in the meantime, the leaked version can be watched below or on the film’s trailer page at AceShowbiz. Bootleg Version of “Indiana Jones and the Kingdom of the Crystal Skull” Trailer:
Continue Reading
Advertisement
You may also like...
Related Topics: