Adam McKay’s comedy The Other Guys has a lot going for it: Even though it mines perennial cop-buddy-movie material, it doesn’t feel generic or strained, and unlike other recent comedies — Dinner for Schmucks pops to mind — it never descends into grating self-consciousness. Forget impressing us with its cleverness; it’s happy to seduce us with its dumbness, and when McKay and his performers — chief among them Will Ferrell, Mark Wahlberg and Eva Mendes — dangle that shiny lure, damn it if it doesn’t work at least half the time…read more [MovieLine] Rumors of Will Ferrell’s demise have been greatly exaggerated. After falling from his perch atop the comedy world with a trio of high-profile disappointments, Semi Pro, Land of the Lost, and Step Brothers, the venerable funnyman seemed destined to join the tragic ranks of fellow SNL alums Mike Myers and Eddie Murphy, comic geniuses who fell prey to their own spectacular success. But he makes a triumphant return to form in The Other Guys, a riotous action comedy from longtime Ferrell collaborator Adam McKay (Anchorman, Talladega Nights)…read more [hollywood.com]

Damon Wayans, Jr., left, and Rob Riggle in Columbia Pictures’ comedy “The Other Guys The recipe for The Other Guys is fairly simple. You take Will Ferrell’s comedic talents, throw in Mark Wahlberg’s action talents, then sprinkle in a vast array of talented supporting actors with capable director Adam McKay at the helm, and you get one of the best buddy cop comedies of the past few years. Everyone looks up to capable, cool detectives and there are none better in the New York Police Department than Highsmith (Samuel L. Jackson) and Danson (Dwayne Johnson). And then there are the other guys. Allen Gamble (Ferrell) is a mild-mannered NYPD detective who thrives on paperwork and adores accounting. His partner, Terry Hoitz (Wahlberg), is ready to hit the streets, take names, and serve some justice; but he’s stuck with Gamble after a humiliating shooting incident. They’re the laughingstock of the department, don’t get along very well with each other, and also can’t seem to get a case. All that changes when Gamble notices a certain company has repeated construction permit violations, and the two are given a chance to do some real police work. They soon discover the company in question to be involved in much more serious underhanded financial dealings and things start to get grim…read more [film.com]

Eva Mendes plays Will Ferrell’s wife in the new action-comedy The Other Guys. In the fourth collaboration between director Adam McKay and Will Ferrell, “The Other Guys,” is a surprisingly delightful hit, easily becoming this summer’s funniest flick to date. While the plotline plays out a bit like a ponzi scheme (read: tough to follow), the hysterical banter, flashy Michael Bay-esque action scenes, and Michael Keaton more than make up for it. Allen Gamble (Ferrell), an accountant for the NYPD, and his partner Terry Hoitz (Wahlberg) are considered the “other guys,” living in the shadow of police super heroes Danson (Dwayne Johnson) and Highsmith (Samuel L. Jackson). When misfortune befalls NYC’s beloved cops, will the “other guys” step up and prove themselves worthy of carrying their badge?…read more [The Epoch Times] 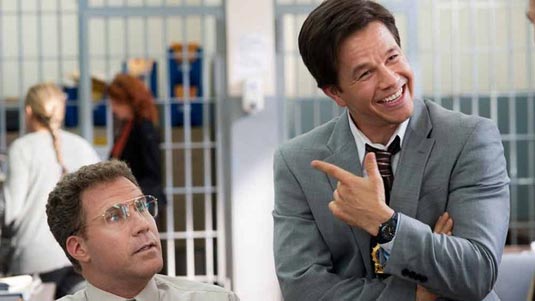 Will Ferrell and Mark Wahlberg, The Other Guys There are a couple of really funny twists on the usual Ferrell persona, as here, he’s actually playing a really smart guy as opposed to his normally clueless characters. That said, Ferrell still gets to be Ferrell, especially once his suppressed pimp personality, Gator (don’t ask), hits the scene. There’s also a funny device where Ferrell’s supposed to be this irresistible ladies man that all the sexy female characters (including Natalie Zea) throw themselves at. Heck, he’s even married to a surprisingly funny Eva Mendes (who even gets to croon the theme song, ‘Pimps Don’t Cry’)- who he’s managed to delude himself into thinking is really a frumpy plain Jane- much to Walhberg’s astonishment…read more [Joblo]

It was depressing watching Mark Wahlberg pretend to be awake for the gunfights and explosions in “Max Payne.’’ It was excruciating to see him look so overmedicated in “The Lovely Bones.’’ And it was absolutely inhumane to make us watch him talk to plants in “The Happening.’’ The only upside was a couple of very funny “Saturday Night Live’’ sketches in which Andy Samberg spoke to real animals using Wahlberg’s sweaty whisper. Wahlberg, of course, has been funny in his own right (see his existentialist fireman in “I Heart Huckabees’’ or his humorless detective in “The Departed’’). But with any luck, 2010 will be the year he gets to stay that way. In the spring, he and his bare torso pilfered a few scenes in “Date Night,’’ and today he stuffs an entire movie down his pants. “The Other Guys’’ sticks him with Will Ferrell, but what seems like another desperate adventure in stunt casting turns out to be a combustible comic bounty…read more [boston.com]

The Other Guys Posters

The opening sequence may well be the best chunk of cinematic satire since Dr. Strangelove, but Adam McKay’s send-up of buddy cop movies finally eats too many doughnuts and grows soft in the middle — just when it needed to flex. The culprit may be opportunity itself: There are a lot of buddy cop movies to visit, and any curious and inspired writer would probably feel compelled to sample them all. Co-writer-director McKay also has a background in sketch comedy, thanks to his years scripting Saturday Night Live, which makes his penchant for spoof and pop culture poking all the more understandable — if not altogether commendable. The Other Guys skewers everything from the Toyota Prius and its allegedly sticky accelerator to Samuel L. Jackson’s entire screen persona…read more [The Vancouver Sun]

Any time you’re laughing so hard at a movie that you miss other jokes, I count that as a mark of quality – and The Other Guys is a comedy that hits that mark early, and often. Adam McKay and Will Ferrell have not only matched but quite possibly surpassed the heights of their previous pinnacle, Anchorman, with a story (yeah, a real story) that delivers as a deconstruction of “supercop” conventions, an actual action movie, a social commentary, and a balls-out comedy, all at the same time. Endlessly quotable and gut-bustingly funny, The Other Guys offers one of Ferrell’s all-time best performances, probably McKay’s most cohesive film to date, and one of the most all-around satisfying comedies in years…read more [Cinematical]

Samuel L. Jackson, left, and Dwayne Johnson in Columbia Pictures’ comedy The Other Guys What saves The Other Guys is that Ferrell and McKay let no scene go until they’ve turned its apparent premise inside-out. The sheer accumulation of absurdities is dizzying. Ferrell’s Gamble turns out to have a complicated back-story: He’s married to a smoking-hot doctor played by Eva Mendes; he’s trying to be a wonk to keep the violent pimp inside him at bay. Opposite Ferrell, Mark Wahlberg doesn’t so much send up his own peculiar combination of thuggishness and sweetness as play it absolutely straight, no winking — and he’s hilarious…read more [npr]

The Other Guys Info

The Other Guys Video Review

The Other Guys Movie Photo Gallery