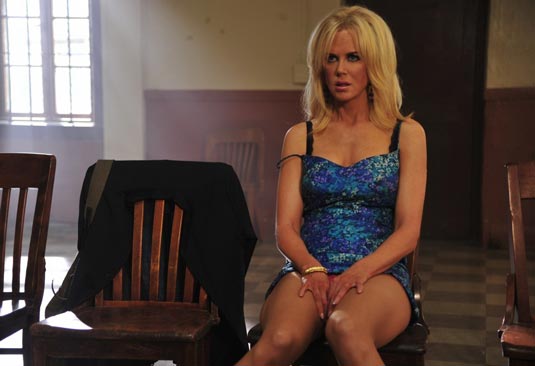 Nicole Kidman has had some major ups and down the past few years. However, there are some interesting films on the horizon for the hot-turned-plastic Aussie star, from Park Chan-Wook‘s creepy thriller Stoker, to the Olivier Dahan-directed Grace Kelly biopic Grace of Monaco. But, before any of these features make their way to theaters, Kidman will trudge across the big screen playing shameless white trash in Lee Daniel‘s already controversial sultry Southern thriller, The Paperboy. Will it be a hit or miss for Kidman? Take a look at the latest clip, which features her languid femme fatale flirting in the car with Zac Efron as titular paperboy: Inspired by Peter Dexter’s crime novel, The Paperboy centers on the quest of two brothers – one an investigative journalist and the other a naïve paperboy – to seek the truth in a strange murder case, urged on by the accused’s wannabe bride. David Oyelowo and John Cusack co-star as Matthew McConaughey‘s colleague and the jailbird object of Kidman’s affections, respectively. The Paperboy will premiere in U.S. on October 3rd, 2012 (yep! that’s only a couple of days away) at the New York Film Festival as part of the Gala Tribute to Nicole Kidman; a limited theatrical release will follow on October 5th. I have to reiterate what I’ve said before – it seems to me that Miss Kidman has started paying more attention to her wrinkles than her acting, hence such acting turbulence in the past few years. Of course I might be wrong, but I’ll keep thinking this until proven differently. So tell me, what do you think? A hit or miss?
Continue Reading
Advertisement
You may also like...
Related Topics:David Oyelowo, Grace Kelly, Grace of Monaco, John Cusack, Matthew McConaughey, Nicole Kidman, Olivier Dahan, The Paperboy, Zac Efron