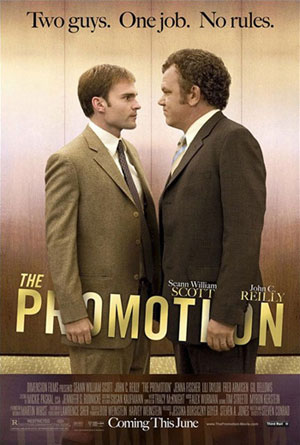 The poster for the upcoming comedy “The Promotion” has been released, featuring John C Reilly (Step Brothers, Walk Hard) and Seann William Scott (Road Trip, Old School, The Dukes of Hazzard) intensely looking at each other. The tagline states: “Two guys. One job. No rules.”In the new movie, two assistant managers (Reilly, Scott) of a corporate grocery store vie for a coveted promotion. “The Promotion” is written and directed by Steve Conrad, who has previously provided script for such films as “The Pursuit of Happyness” and “The Weather Man.” His new movie is scheduled to hit theaters on June 6th.