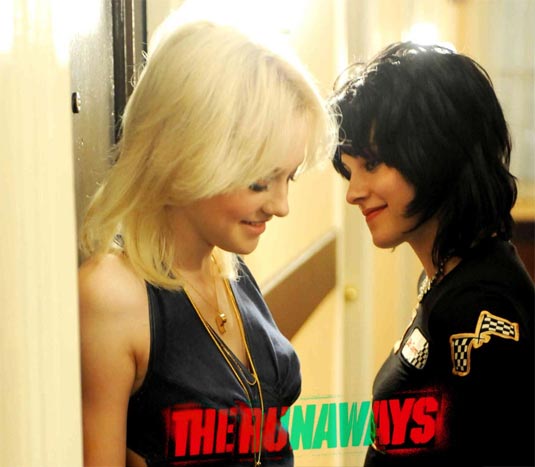 Earlier today we posted new photos from “The Runaways,” and now we have a clip. The Runaways follows two friends, Joan Jett (Kristen Stewart) and Cherie Currie (Dakota Fanning), as they rise from rebellious Southern California kids to rock stars of the now legendary group that paved the way for future generations of girl bands. They fall under the Svengali-like influence of rock impresario Kim Fowley (Michael Shannon), who turns the group into an outrageous success and a family of misfits. With its tough-chick image and raw talent, the band quickly earns a name for itself-and so do its two leads: Joan is the band’s pure rock’ n’ roll heart, while Cherie, with her Bowie-Bardot looks, is the sex kitten. Apparition will open The Runaways in over 1400 theaters on March 19. The music-fueled story of the ground-breaking, all girl, teenage rock band of the 1970s stars Kristen Stewart, Dakota Fanning, Danielle Riley Keough, Scout Taylor-Compton (TV’s “Arrested Development”), and Michael Shannon. The film marks the first theatrical collaboration between Apparition and River Road Entertainment. Executive Produced by Joan Jett and Produced by River Road and Linson Entertainment, The Runaways will have its world premiere at the Sundance Film Festival Sunday, January 24. The Runaways Clip: [youtube]http://www.youtube.com/watch?v=WzvG2BFbc5E&feature=player_embedded[/youtube] The Floria Sigismondi-directed film has its world premiere at the Sundance Film Festival on January 24th. “The Runaways” is scheduled to hit theaters on March 19th, 2010, in limited release. What do you think about the new clip? Looking forward to “The Runaways”?
Continue Reading
Advertisement
You may also like...
Related Topics:dakota fanning, Kristen Stewart, Michael Shannon, Scout Taylor-Compton, Sundance Film Festival, The Runaways