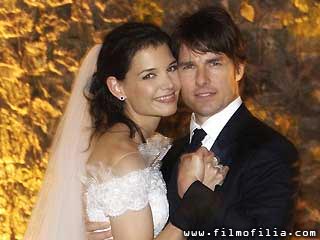 A computer technician involved in a plot to extort $1.3m (£663,000) from Tom Cruise in exchange for stolen wedding photographs was sentenced to two years probation yesterday.Marc Lewis Gittleman kept approximately 7,000 shots of Cruise and Katie Holmes’ 2006 nuptials in Italy after a photographer brought in a damaged computer hard drive for repair. Gittleman pleaded guilty last September to transporting stolen property after admitting he copied the photographs and took them to infamous celebrity porn peddler David Hans Schmidt.Schmidt threatened to make the pictures public unless the Cruise paid up. He was arrested last July and committed suicide in September two weeks before his court appearance. Gittleman was put on probation and fined $3,000 (£1,532).Cruise is no stranger to having his private life scrutinised by the press and public, but he could be forgiven for asking what he has done to deserve the latest wave of intrusion. Princess Diana biographer Andrew Morton’s book Tom Cruise: An Unauthorized Biography is due to be published in the US on Tuesday and has already drawn the attention of Cruise’s attorneys for its focus on the star’s involvement with the Church of Scientology.
Continue Reading
Advertisement
You may also like...
Related Topics:Katie Holmes, Tom Cruise