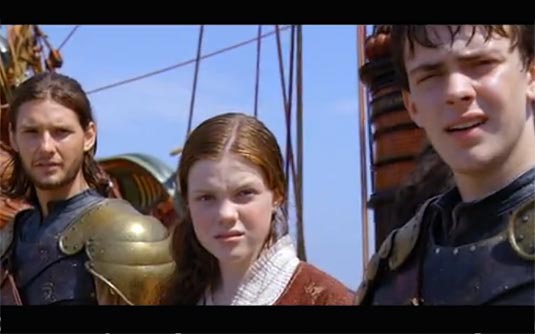 Three new clips for The Chronicles Of Narnia 3: The Voyage Of The Dawn Treader have just hit the Internet thanks to NarniaFans.com. This time around – Edmund and Lucy Pevensie, along with their pesky cousin Eustace Scrubb – find themselves swallowed into a painting and on to a fantastic Narnian ship headed for the very edges of the world. Joining forces once again with their royal friend Prince Caspian and the warrior mouse Reepicheep, they are whisked away on a mysterious mission to the Lone Islands, and beyond. On this bewitching voyage that will test their hearts and spirits, the trio will face magical Dufflepuds, sinister slave traders, roaring dragons and enchanted merfolk. Only an entirely uncharted journey to Aslan’s Country – a voyage of destiny and transformation for each of those aboard the Dawn. The film, which has found itself a new home at 20 Century Fox since Walt Disney dropped the option, is being directed by Michael Apted (Thunderheart, The World Is Not Enough, Amazing Grace) and stars Georgie Henley, Skandar Keynes, Ben Barnes, Will Poulter, Gary Sweet, Bruce Spence, Arthur Angel, Shane Rangi and Liam Neeson. The Chronicles of Narnia 3 hits 3D and 2D theaters on December 10th, 2010.

The Chronicles of Narnia 3 clip #1: The Adventure Begins

The Chronicles of Narnia 3 clip #3: Sea of Lilies 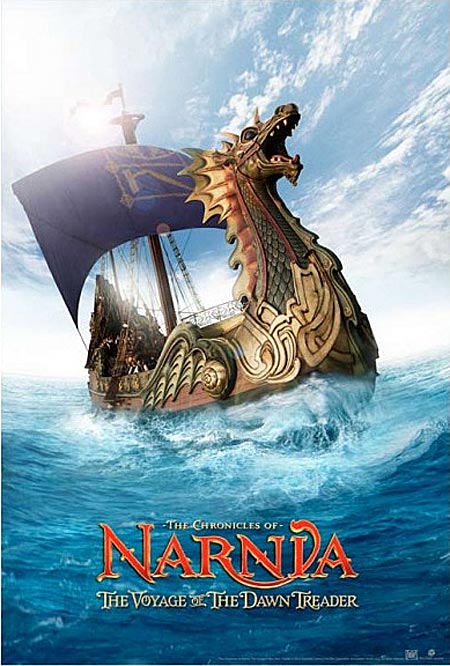 The Chronicles of Narnia: The Voyage of the Dawn Treader Poster