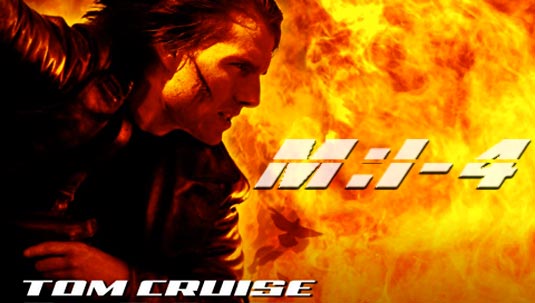 Tom Cruise has been officially confirmed for the Mission: Impossible 4 movie. According to Deadline Hollywood, the deal is locked in. The report also confirmed previous info that J.J. Abrams,  “Mission Impossible 3″ director, will not be directing this fourth installment, but he’s producing the project… Paramount Chairman and CEO Brad Grey said that

“Tom and J.J. are great talents and we are excited to be working with them to re-launch this legendary franchise.”

Josh Applebaum and Andre Nemec are writing the script (link), based on a story idea from Cruise and Abrams. The movie reunites Cruise and Paramount, which cut the actor loose from a long-term development deal in 2006. A director for Mission: Impossible 4 ( Mission: Impossible – Ghost Protocol ) has yet to be announced, but shooting is planned to begin this summer for a Memorial Day 2011 weekend release. Cruise next stars in action comedy Knight and Day with Cameron Diaz, opening July 2 in cinemas.
Continue Reading
Advertisement
You may also like...
Related Topics:Andre Nemec, JJ Abrams, Josh Applebaum, Mission: Impossible 4, Tom Cruise