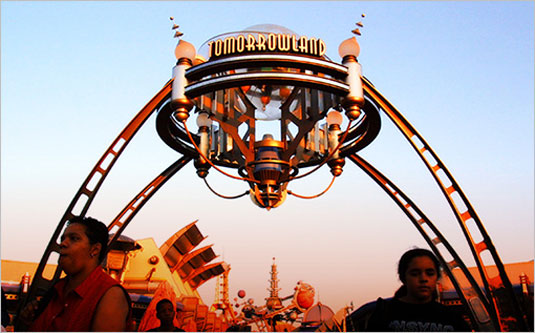 Walt Disney Pictures have released very few details about their top-secret Tomorrowland project. All we know at this point is that George Clooney and Hugh Laurie are starring, Brad Bird is directing, and Damon Lindelof is writing the script. Recently, thanks to HitFix, a short story description has been uncovered that offers a few surprising details. Read more after the jump.

“A teenage girl, a genius middle-aged man (who was kicked out of Tomorrowland) and a pre-pubescent girl robot attempt to get to and unravel what happened to Tomorrowland, which exists in an alternative dimension, in order to save Earth.”

This description is being used to help assemble the cast. There was speculation that the story revolves around UFOs and and other sci-fi elements, but, if this new report is to be believed, that is not the case. Here’s an extended breakdown, which includes details regarding George Clooney and Hugh Laurie’s characters:

“The Tomorrowland that they keep referring to in this break-down appears to be a place where science has blown past the world we live in, and when Frank Walker was a young man, he first encountered the promise of Tomorrowland at the 1964 World’s Fair. David Nix was there, showing off his own work, and he told Walker to come back when he was older and his inventions actually worked. A girl named Athena saw great promise in 11-year-old Frank, though, and she snuck him into Tomorrowland. Eventually, Frank was discovered by Nix and thrown out, but not before learning that the girl he loved, Athena, was actually a robot. By the time we meet Frank in the film, he’s much older, and George Clooney is set to play the part. Nix is the role that Hugh Laurie is signed for, and by the point the main story of the film kicks in, Nix has been the mayor of Tomorrowland for many years, and he’s become rotten, corrupt. Athena, unchanged since Frank was a young man, plays a key role in the film, and the hero is a girl named Casey who has a quick scientific mind that becomes important as the story unfolds. Nix is a guy who values technical accomplishment over creative thinking, and when he throws Frank out of Tomorrowland, he’s not alone. Every creative thinker is banished, allowing Nix to focus purely on aesthetics and technical advancement for its own sake. There’s interdimensional travel, human-looking robots, and a quest for revenge on the part of Frank. He is a bitter adult, and the film is not just about Casey’s adventure, but also about Frank rediscovering the kid he used to be. It sounds like young Frank actually plays a decent-sized role in the film, so we may see both timelines play out to some extent.”

Of course, nothing has been confirmed by Disney or the filmmakers, and I doubt we’ll get an official plot synopsis anytime soon, but we’ll keep you posted on any further updates so don’t forget to check us out. Tomorrowland comes to theaters on December 19th, 2014. What do you think about these new Tomorrowland details? Do they make you more itchy to find out more?

Halle Berry Confirms Her Return in X-MEN: DAYS OF FUTURE PAST As Storm
Stanley Kubrick’s NAPOLEON to be Developed by Steven Spielberg as a Miniseries
Advertisement